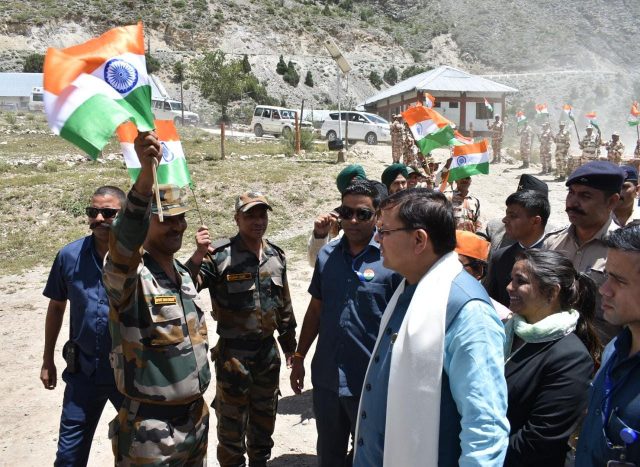 CHAMOLI/DEHRADUN, 10 Aug: Chief Minister Pushkar Singh Dhami participated in the ‘Har Ghar Tiranga’ programme in the border village Malari (in district Chamoli) today along with the Indian Army, ITBP (Himveer), Border Road Organisation (Shivalik) personnel and the residents of the border village who are the second line of defence for the country. On the occasion, he congratulated them on the Amrit Mahotsav of Independence. Tremendous enthusiasm was seen amongst the army personnel and the residents of the border villages regarding the ‘Har Ghar Tiranga’ programme during the CM’s stay there. In the Tiranga programme organised in the border village Malari, along with the soldiers of the army, the people of border villages Kailash Pur, Mahargaon, Kosha, Dronagiri, Niti, Bampa, Gamshali, Farkiya, Jhelum, Jumma, Kaga, Garpak, besides Malari also participated with enthusiasm.

Addressing the gathering, Chief Minister Pushkar Singh Dhami said that the Amrit Mahotsav of Independence has become a people’s campaign now. The current generation was fortunate to be witness to it. He asserted, “India is progressing well and evolving as a powerful and proud India under the leadership of Prime Minister Narendra Modi. The tricolour is our pride. Today the whole country is remembering the revolutionaries who sacrificed their lives for the freedom of the country. Tricolour programme is being held in every house across the country. The next 25 years would be the Amrit Kaal (prime period) for the country. The state of Uttarakhand is making rapid progress towards development today and the government is determined to make Uttarakhand an ideal state by 2025”. The CM added, ”According to the geographical conditions of the hill state, development plans are being prepared. All of us are safe only because of the defence and para military personnel guarding our borders and they are bravehearts, taking physical suffering in the stride while guarding our borders”.

Dhami also listed the achievement of the BJP Government in past few years. He also congratulated everyone on the Amrit Mahotsav of Independence and the holy Raksha Bandhan festival. He also heard the problems of the residents and assured them of their resolution at the earliest. The Chief Minister also assured the restoration of Indramani temple in Malari, Shiva temple road and improvement of motorway from Kaga to Garpak in the area. During the programme, the women of the area tied rakhi to the Chief Minister and wished him long life. Earlier, on the arrival of the Chief Minister for the first time in Malari, the residents of the area welcomed him and the other dignitaries with the traditional Pauna dance and presented to them angavastras and souvenirs.