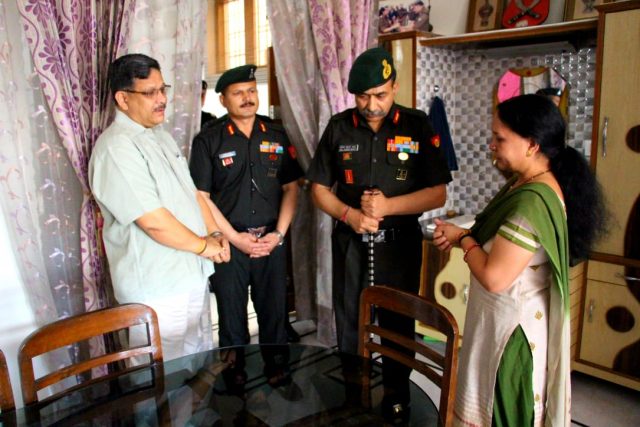 By OUR STAFF REPORTER
Dehradun, 9 May: Chief of Army Staff General Bipin Rawat was keen to visit martyrs’ families, here, personally, but due to scheduling issues, on his behalf, Lt Gen AK Bhatt, Military Secretary, Army Headquarters, IHQ of MOD (Army), accompanied by Col Prithviraj Singh Rawat, Colonel, Veterans HQ, Uttarakhand Sub Area, took up the responsibility.
They visited the family members of Martyr Major Chitresh Bisht of 55 Engineering Regiment and, also, family members of Martyr Major VS Dhaundiyal of 55 Rashtriya Rifles on Wednesday. The visit of the General Officer to the families of both martyred officers was in response to the supreme sacrifice made by Major Chitresh Bisht, who was martyred while diffusing an IED on 16 February in general area Lam in Naushera Sector of Rajouri District; and Major VS Dhaundiyal, who was martyred during counter insurgency operations on 18 February near Pulwama.