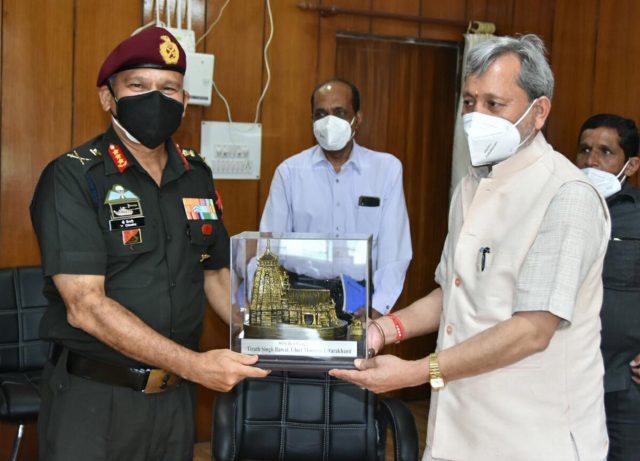 Dehradun, 24 Jun: Lieutenant General Yogendra Dimri is on a visit to Dehradun from 24 to 25 June. On his maiden visit, after taking over command as General Officer Commanding-in-Chief, Central Command, on 1 April, he is accompanied by Lieutenant General SS Mahal, General Officer Commanding, Uttar Bharat Area.
He was briefed on the operational and administrative preparedness by Major General Sanjeev Khatri, General Officer Commanding, Uttarakhand Sub Area. He was also made aware of the measures put in place for COVID management, procurement of essential medical supplies, as also support to the civil administration. The General took a windshield tour of Dehradun Cantt and visited MH Dehradun.
The General also met Chief Minister Tirath Singh Rawat and took up various issues pertaining to the Army and ex-servicemen with him.
The General Officer was commissioned into the Corps of Engineers (The Bombay Sappers) on 17 December, 1983. An alumnus of National Defence Academy, he was awarded the President’s Gold Medal at the Indian Military Academy, having passed out first in Order of Merit. He is also winner of the prestigious ‘Silver Grenade’ in the Young Officers’ Course and Gold Medal in Degree Course. He is an alumnus of Defence Services Staff College, Wellington, Defence Services Command & Staff College, Dhaka, Army War College, Mhow, and National Defence College, New Delhi. He has staff and operational experience, has commanded an Engineer Brigade, an Infantry Brigade on the Line of Control, Counter Insurgency Force in Jammu & Kashmir and the prestigious Sudarshan Chakra Strike Corps. He has worked as Additional Military Secretary at Military Secretary Branch, Brigadier General Staff (Operations) of Corps, Deputy Director General of Military Operations, Additional Director General (Discipline & Vigilance) and Director General (Discipline, Ceremonial & Welfare) at Adjutant General’s Branch and Chief of Staff at a Command Headquarters. He has also served as Military Observer in The United Nations Transitional Authority in Cambodia (UNTAC) and as Directing Staff at Defence Services Staff College, Wellington.
He has been awarded the Ati Vishisht Seva Medal, Vishisht Seva Medal, the General Officer Commanding-in-Chief, Western Command Commendation Card, twice, and the Chief of Staff Committee Commendation Card. He is married to Nidhi Dimri, who is the Regional President of the Army Wives Welfare Association.