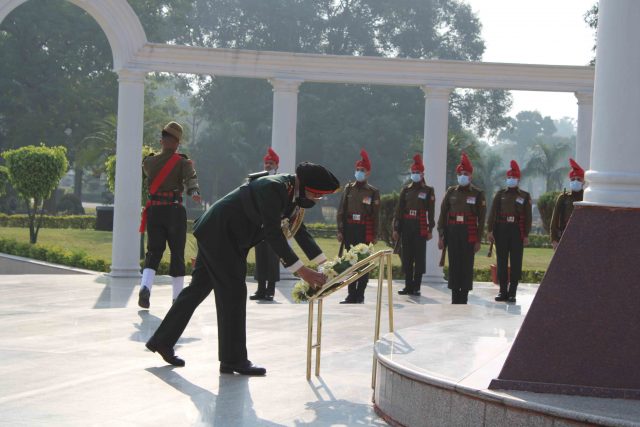 Dehradun, 13 Nov: Lt General Harinder Singh, AVSM, VSM, YSM, SM, took over as the 50th Commandant of the Indian Military Academy, here, today. He paid tribute to the Martyrs at the War Memorial in a solemn ceremony, recognising their supreme sacrifice for the nation.
An alumnus of NDA Khadakwasla, the General Officer was commissioned into the 9 Maratha Light Infantry, one of the oldest regiments of the Indian Army. He excelled in Hockey at the Academy and is a former Services Hockey player. He, later, commanded a Rashtriya Rifles Battalion in active counter terrorist operations while deployed in Kupwara Sector. The officer carries varied operational experience having served in different terrains.
He has the distinction of commanding two different brigades, including command of the most reputed UN Multi-National Brigade deployed in Eastern Congo. He commanded a mountain division in Kashmir and a Corps along active Northern Borders.
The General Officer earlier served with Military Operation and Operational Logistics Directorates in the rank of Major and Colonel respectively. As a Brigadier, he was instrumental in raising the Directorate of Indian Army Veterans (DIAV) at the Army HQ. He has also been an instructor at IMA, Dehradun, and Infantry School, Mhow. He served as a Staff Officer at the UN Mission in Angola. He attended Defence Services Staff College, Higher Command Course and excelled in research work at the National Defence College, New Delhi, for which he was awarded the Colonel Pyare Lal Gold Medal. He has also been an international graduate fellow at Asia-Pacific Centre for Security Studies, Hawaii, USA.
The Commandant has held two fellowships in his service career – as a Research Fellow at IDSA, New Delhi, and later at S Rajaratnam School of International Studies, Singapore, and published several monographs, papers and write-ups in international and national journals and dailies.
The General Officer has taken over the Command Baton of the most prestigious Indian Military Academy from Maj Gen JS Mangat, who has been officiating after Lt Gen Jaiveer Singh Negi superannuated on 30 September, 2020.

Garhwal Post has established itself as a credible, balanced and forward looking newspaper in India. Based in Uttarakhand, the daily is read by the aware, socially and culturally responsible, high-income elite of society.
Contact us: info@garhwalpost.in
gay men's social network bakersfield hookup sites local date hookup