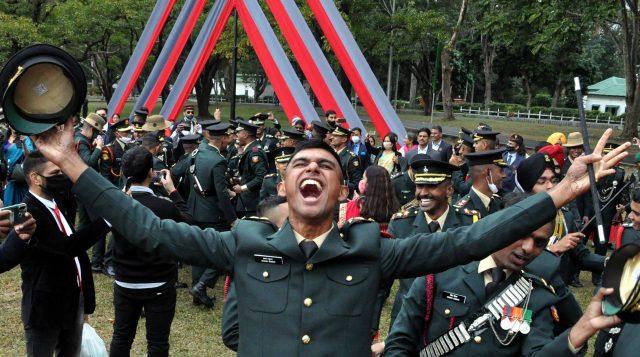 By OUR STAFF REPORTER
DEHRADUN, 12 Dec: A total of 395 Gentlemen Cadets of 147 Regular Course and 130 Technical Graduate Course, including 70 Gentlemen Cadets from nine friendly foreign countries, successfully passed out from the portals of Indian Military Academy, overcoming all challenges of COVID-19. The Gentlemen Cadets displayed inspiring enthusiasm and zeal, and put up an excellent show, marching with perfection to Military tunes of `Col Bogey’, `Sare Jahan Se Achha’ and Kadam Kadam Badhaye Ja with pride and élan reflecting in each step. They knew that their parents and loved ones were witnessing each step with great pride and affection which added to the ‘Josh’ in their smart movements. 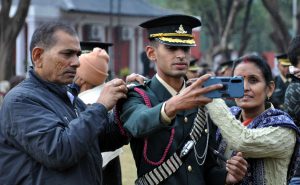 To motivate and inspire the Passing Out Course, Vice Chief of Army Staff Lt-General SK Saini was himself present as the Reviewing Officer of the Parade. He congratulated the Gentlemen Cadets on the successful completion of their training at IMA. Lt-General Saini, complimented the instructors and Gentlemen Cadets for the excellent parade, immaculate turnout as well as the crisp, synergised drill movements indicating high standards of training and discipline imbibed by the young leaders. The entire ceremony was conducted with due COVID precautions, including wearing of masks, gloves and drill formations adapted to maintain requisite distance between files/columns while executing the drill movements over the reverberating Drill Square. In many ways, this Passing Out Parade has been one of its kind amongst peer institutions across the world as each adapted itself to the prevailing COVID environment. 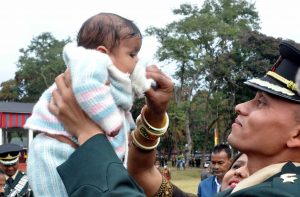 It is pertinent that IMA showcased its standards in an impressive Passing Out Parade during June 20 despite all COVID constraints which was widely streamed across media including record live viewership on social media. Parents and relatives were this term looking forward to being present for the Parade to participate in this ‘Once in a lifetime experience’. 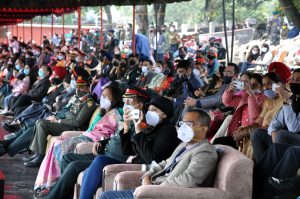 Lt-General Saini, the Reviewing Officer, also complimented the 70 Gentlemen Cadets from friendly foreign countries who trained at IMA. He said “I am sure, you as ambassadors of your country carry back a treasure of fond memories of IMA and training which you shall cherish for a lifetime. The Indian Military Academy has imparted training which will form the bedrock for your growth, both professional and personal, and will definitely strengthen the ties between our countries”.
The Passing Out Parade in June 20 which was reviewed by the Chief of Army Staff witnessed the introduction of “Pehla Kadam” signifying the first step that the Gentlemen Cadets take as they join the fraternity of brave Commissioned Officers of their respective Armies. The ‘Pipping Ceremony’, where the GCs don the ranks of Commissioned Officer, was this time carried out by the parents themselves while observing all social distancing and personal protection protocols.
While addressing the Passing out Course, the Reviewing Officer, exhorted all to dedicate themselves to the service of the nation. He said, “You are just a step away from the historic and magnificent moment of your commissioning into the most elite forces. Let me adjure you to value the great traditions of the Indian Army, the basic tenets of which are the love for your country, love and compassion for the men you command and unflinching loyalty towards them. The fundamentals of soldiering have been instilled in you here; the onus is now on your young and firm shoulders to define the various facets of the art of soldiering and to be men of formidable bearing, courage and stature”. He also complemented and thanked the parents of the passing out course who had motivated their wards to choose such a noble profession to serve the nation and face all threats that our country might be required to counter at present and in the future.
While being conducted in scaled down backdrop on account COVID, the Passing Out Parade retained ceremonial grandeur and regalia symbolic of this ‘once in a lifetime’ moment for the proud Gentlemen Cadets. The Parade was preceded by a solemn wreath laying ceremony at the Academy War Memorial in which the Academy remembered its 889 martyrs who made the ultimate sacrifice in service of the nation through the years and all committed themselves to follow the same path of bravery and selfless courage.
The Reviewing Officer presented the following awards:-
• The coveted award of the Sword of Honour was presented to ACA Watandeep S Sidhu.
• Gold Medal for the Gentleman Cadet standing First in the Order of Merit was presented to AUO Majji Giridhar.
• Silver Medal for the Gentleman Cadet standing Second in the Order of Merit was presented to BUO Nidesh Singh Yadav.
• Bronze Medal for the Gentleman Cadet standing Third in the Order of Merit was presented to SUO Shikhar Thapa.
• Silver Medal for the Gentleman Cadet standing First in the Order of Merit from Technical Graduate Course was presented to JUO Jasminder Pal Singh Sidhu.
• Silver Medal for the Gentleman Cadet standing First in the Order of Merit from Foreign GCs was presented to GC Tandin Dorji.
• Chief of Army Staff Banner was awarded to Cassino Company for standing Overall First amongst 16 companies for the Autumn Term 2020.

Garhwal Post has established itself as a credible, balanced and forward looking newspaper in India. Based in Uttarakhand, the daily is read by the aware, socially and culturally responsible, high-income elite of society.
Contact us: info@garhwalpost.in
https://garhwalpost.in/find-local-singles-in-my-area/