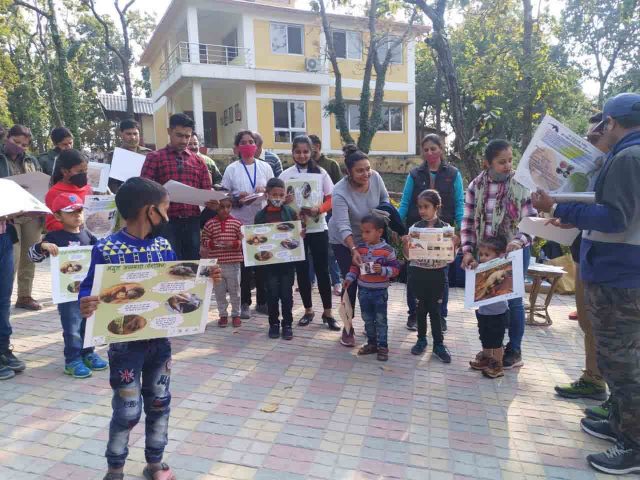 By OUR STAFF REPORTER
Dehradun, 21 Feb: Every year, the third Saturday of February is observed as World Pangolin Day to raise awareness about the world’s most trafficked mammal. Today, Maaty Organisation, Dehradun, along with the Uttarakhand Forest Department and Dehradun Zoo, celebrated the 10th World Pangolin Day by organising a mass awareness campaign at Dehradun Zoo. The aim was to sensitise people about the Pangolin, the threats it faces and the need for its conservation.
On the occasion, Dr Ved Prakash, Founder and Scientist, Maaty Organisation, who is a Member of the IUCN SSC Pangolin specialist group, spoke about the Pangolin, its distribution, major threats, how its conservation could be furthered and awareness generaed. He acknowledged the efforts and contribution of SS Rasaily (APCCF, Uttarakhand Forest Department) and PK Patro (Director, Dehradun Zoo Authority) in organising the programme. The Maaty Team, along with its volunteers, conducted a survey among the visitors and provided information about the species through awareness materials, including stickers, pamphlets and posters. They educated the visitors and children in and around the zoo and made sure that everyone was well informed about the status of the Pangolin and pledged to protect in every way possible. Dr Himani Badoni, Oyndrila Sanyal, Udit Rajpoot, Anupriya, Pratiksha Mahar, Shefali Rana, Mritunjay Chowdhury and the volunteers helped make the event a successful one.
The Pangolin is a nocturnal, shy creature often mistaken to be a reptile. Eight species of Pangolin are present worldwide in parts of the African and Asian continents. Of these four species are in Asia and four in Africa, while two species in India are the Indian Pangolin (Manis crassicaudata) and Chinese Pangolin (Manis pentadactyle).
The Pangolin is a rare animal having a conical shaped head, teeth less jaws and whose body is completely coated with armour of scales made up of keratin. These scales provide a defence when attacked by a predator, as it curls up into a ball protecting it from attack. It has a sticky tongue, attached to its pelvis and the last pair of ribs and when extended can be up to half the length of the its body. The tongue helps the animal to catch the ants and termites in the deep cavities of the mounds. It has five toes in each paws, and three long, curved claws on the forefeet used to destroy termites and ants’ mounds and dig nesting and sleeping burrows which is up to 1-2 metres long. Due to its poor vision, it locates termites and ants by its sense of smell. One adult can consume approximately 20000 ants and insects per day and up to 70 million in a year. The pangolin has a key ecological role in saving the forest cover and agricultural lands from termites. Generally, the Pangolin is a solitary creature but during its mating period it lives in a pair. The female Pangolin gives birth to 1 pangolin in a year. The baby Pangolin, known as Pango-Pup, is nutured by the female Pangolin and protected from every threat.
Over last few decades, the trafficking of Pangolin has increased tremendously for meat, superstitious practices and in accessories making. According to a report, 300 Pangolins are illegally poached per day. The rate of poaching in the previous decade is 1000 tigers, 11000 Rhinos and 1,000,000 Pangolin, which makes clear the status of threat to the species. Loss of habitat is another reason for shrinking numbers of Pangolin. For the conservation of Pangolin it is the endangered category of the International Union for Conservation of Nature (IUCN) and in Indian Wildlife Protection Act, 1972 marked as Schedule I species.

Garhwal Post has established itself as a credible, balanced and forward looking newspaper in India. Based in Uttarakhand, the daily is read by the aware, socially and culturally responsible, high-income elite of society.
Contact us: info@garhwalpost.in
absolutely free hookup sites https://garhwalpost.in/hijri-to-gregorian-date/ single ladie