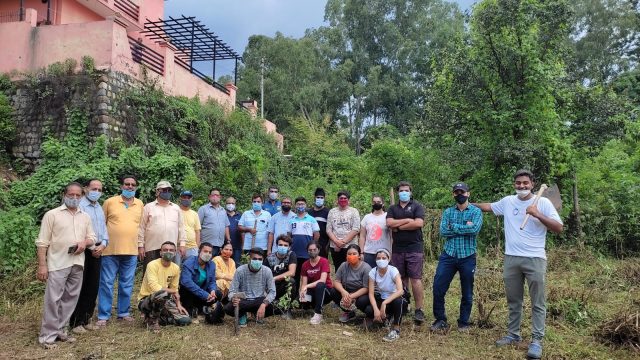 DEHRADUN, 8 Aug: Dehradun based student activist group Making a Difference by Being a Difference (MAD) held a plantation drive in Drona Vatika at Sahastradhara road on Sunday, while taking all the necessary precautions and safety measures against Covid-19. Members of the organisation assembled at Astley Hall and proceeded for the activity wearing masks ensuring social distancing and following the safety guidelines mandated by the Government during the corona virus outbreak. This plantation drive was undertaken to sensitise the locals on the importance of conserving and protecting the biodiversity of their district. MAD by BTD successfully conducted the drive, planting 20 plants provided to them by Anu Pant of Feel Good organisation. For 10 years, now, MAD has been committed to its cause of promoting environmental sensitivity and civic consciousness through revival of streams, plantation drives, clean up drives, wall transformation activities and awareness campaigns. Anu Pant also joined the plantation drive along with approximately 10 local people and senior citizens of the locality. Among the members of MAD present were Medha, Tanmay, Arth, Pratyakshi, Aryan, Kartik, Shashwat and Amogh. to be strong and know their importance at home and in society. The programme was conducted by Anita Negi. President of the Manch Mohan Singh Chauhan and President of Sankalp Society Ravi Singh Negi conveyed their best wishes on Teej to all the residents of Uttarakhand. Among those present were Shyamji Yadav, Devendra Pundir, Budh Singh Rawat, Mahesh Rauthan, Ashokvardhan Singh, Sohan Singh Panwar, Abhinav Chauhan, Ajay Rauthan, Sushil Tyagi, Ranjeet Kantura, Subhash Rawat, Anup Chauhan, Sushma Shahi, Meena Mal, Reeta Rauthan, Chhaya Rauthan, Suman Rawat, Madhu Tyagi, Sanjana Chauhan, Suman Rawat, Purnima Kantura, etc. Boy pumps air into minor’s private parts after brawl BARABANKI (UP), 8 Aug (IANS): In a shocking incident, a minor ruptured the intestines and injured the private parts of another minor during a brawl in a factory in Uttar Pradesh’s Barabanki district, police said. The accused allegedly attacked the 12-year-old with a pressure gun. A case has been registered against the accused after a written complaint was filed by the victim’s father and he has been arrested. According to the police spokesman, the incident was reported from a factory located on Kursi Road industrial area of Barabanki where the victim used to work. The 14-year-old accused belongs to Bachrawan in Rae Bareli and used to work in the same factory. Both minors entered into a brawl over some issue after which the 14-year-old boy was operated upon by the doctors. pumped air into the private parts of the victim with a pressure gun. As the condition of the victim deteriorated, he was taken to the Lucknow Trauma Centre, where doctors informed the parents that the minor’s intestine had been ruptured due to the air pressure. The minor After the incident was reported, officials of the Labour Department reached the spot to investigate the matter. During this, the investigation team also examined the CCTV footage installed in the factory.