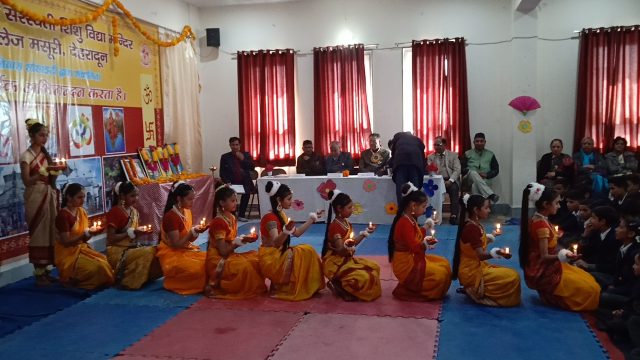 Mussoorie, 13 Nov: The annual celebrations of Mahatma Yogeshwar Saraswati Shishu Vidya Mandir Inter College, Mussoorie, and the birth anniversary of Ma Sarveshwari were celebrated with great enthusiasm, here, today. The inaugural lamp was jointly lit by Mussoorie MLA Ganesh Joshi and Municipal Chairman Anuj Gupta. Principal Manoj Rayal welcomed all the guests.
The Principal also presented the annual report of the school, in which he said that the students had performed well up to the national level as well as in the board examinations. On the occasion, a Medical Kit was provided to the school by Lions Club Mussoorie.
MLA Joshi promised a generator to the school. On the occasion, an exhibition of handicrafts, art, models of science, etc., was also organised which was praised by all.
Principal Rayal said that along with the anniversary of the school, not only in the whole of India, but also in many countries, the birth anniversary of Ma Sarveshwari was celebrated. President of Gandhi Niwas Society, Madan Mohan Sharma said the school began as a Shishu Mandir and was now an Inter College.
Municipal President Anuj Gupta said that the school was doing excellent work among Hindi medium schools, with limited resources. It was an example for such schools. He promised that the municipality would provide all possible help for the development of the school.
MLA Joshi said that good values ought to be instilled in the children at home, also. He praised the work being done by the Principal and staff in the field of education. Present on the occasion were Madan Mohan Karnwal, Mussoorie BJP Mandal President Mohan Petwal, Kushal Rana, Gambhir Panwar, Rakesh Agarwal, Alok Malhotra, Sapna Sharma, Sumit Bhandari, committee officials, and teachers of the school.