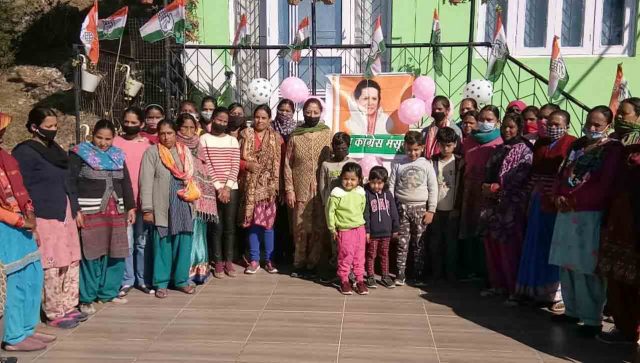 By Our Staff Reporter
Mussoorie, 9 Dec: The 74th birthday of AICC President Sonia Gandhi was celebrated here today by the Mussoorie Mahila Congress at Spring Road. A cake was also cut by Mahila Congress President Jasbeer Kaur.
The workers gathered and celebrated the event with fervor. Party workers shouted slogans like “Sonia Gandhi zindabad” and “Congress party zindabad”. Jasbeer Kaur said that Sonia Gandhi worked to take care of the Congress family and, after Rajiv Gandhi’s death, she took care of the country and led it towards development. She said that Sonia was a source of inspiration for the country and a guide. Admitting that, at present, the Congress is not able to perform well in the elections but it had not upset the party workers and, in the upcoming elections, it would return to power.
She wished Sonia Gandhi a long life and good health.