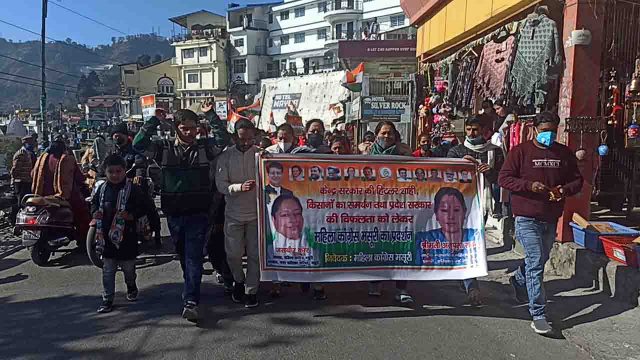 By Our Staff Reporter
Mussoorie, 24 Dec: The Mahila Congress led a protest rally against the central and state BJP governments, today, from Gandhi Chowk to Congress Bhawan under the leadership of Congress National General Secretary Anupama Rawat and Mussoorie Women’s Congress President Jasbir Kaur. Congress workers shouted slogans against the BJP government on this occasion.
Anupama Rawat condemned the agriculture laws passed by the Central Government. She claimed that, today, people all over the country were mobilising against the BJP Government. She said that BJP State President Bansidhar Bhagat was talking about winning 60 plus seats out of 70 in Uttarakhand, which was a pipedream. The failed Trivendra Singh Rawat government of Uttarakhand would be overthrown.
She said that the former Chief Minister, Harish Rawat, had always worked for the public, but the present government served only the industrialists.
Jasbir Kaur said that every person in the country was upset due to the wrong policies of the BJP. Unemployment was on the rise, while farmers were on the streets. The Modi Government had ruined the entire country, due to which there is a lot of resentment. The condition of the state was also bad. She said that, in 2022, the people of the state would shoo out the BJP government, and do the same in 2024 to Mode.
Present on the occasion were Rubina Anjum, Neelam, Sumita, Sangeeta, Rekha, Aarti, Bala, Sarvesh Reena, Bina, Priya, Gyanati, Gajra, Vimala, Sulochana, Durga, Anita Bist, Rupa Kumari, Sundari, Sunita Semwal, Sudha Bhandari, Aarti Agarwal, Rami Devi, Bharosi Rawat, Santosh Bodial, Shobha, Madhu, Jagpal Gusain, Naveen Abhishek, Pradeep Rawat, Nuro Shahnaz and others.