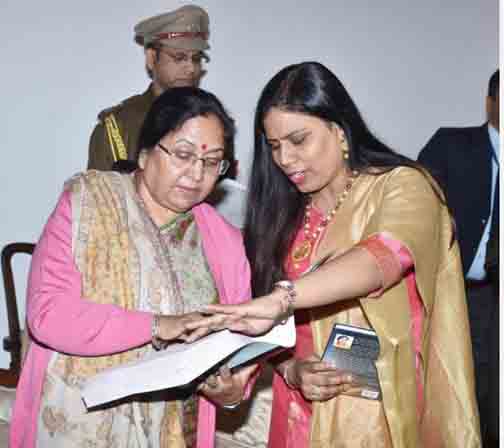 By OUR STAFF REPORTER
DEHRADUN, 8 Dec: Governor Baby Rani Maurya released a book “Mahila Darpan” written by Dr. Sujata Sanjay of Sanjay Orthopaedic Spine & Maternity Centre Jakhan, at Raj Bhawan. This book is written in both Devnagari and brail script.
Maurya has appreciated the efforts made by Dr. Sujata and said this book will help all women, particularly the visually impaired. She also emphasized that all people should be concerned about health issues but it is needed more in case of women. The Governor also pointed out that if small health problems are ignored in the beginning then they may become serious. She said that a healthy woman and a healthy family are the basic foundation of society and the nation.
According to Dr. Sujata Sanjay the idea of writing this book came after knowing the suffering of blind women who visited her OPD during their pregnancy. This is the first book written in brail language in India. This work has been recognized by India book of Records and International Book of Records. The book has been written keeping in mind the fact that women should know about their basic health structure and function of body.
During this program, other guests were Guinness and Limca Book record holder Orthopeadic Surgeon Dr. BKS Sanjay, Director of NIEPVD Dr. Nachiketa Raut, Secretary of SHEWA Dr. Pratik Sanjay, and Social worker Yogesh Aggrawal apart from others.

Garhwal Post has established itself as a credible, balanced and forward looking newspaper in India. Based in Uttarakhand, the daily is read by the aware, socially and culturally responsible, high-income elite of society.
Contact us: info@garhwalpost.in
speed dating newport beach