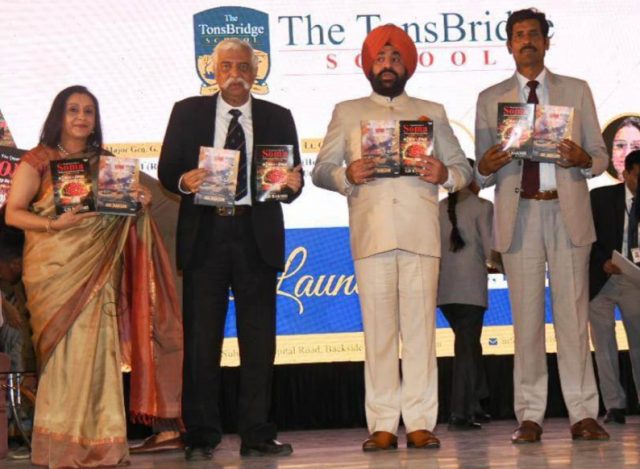 By Our Staff Reporter
Dehradun, 6 Dec: Governor Lt-General Gurmit Singh (Retd) participated in the program organised at the Tons Bridge School located at Nanda Ki Chowki on Tuesday. The Governor also released two books titled “The Quantum Book of SOMA” and “Russia Ukraine War: Lesson Learnt” written by Major General GD Bakshi (Retd).
During this event, Lt-General Singh said that after completing his service from the Indian Army, General Bakshi’s life story teaches us how to stay connected with the country, society, culture, civilization and our future generations. The Governor added that he had the opportunity to work with General Bakshi thrice, during which he learnt a lot.
The Governor said that we should know what are our roots and identity. He said that it is necessary for all of us to recognize our heritage. Addressing the students present in the program, the Governor said that we all should develop the power of leadership in order to become leaders fit to serve the country.
Commenting upon the book  ‘Ukraine-Russia War’,  Lt-General Singh said that in this book, India-Pakistan war of 1971 and Ukraine-Russia War starting from 2021 have been compared. The Governor said that on this day India is also responding to the challenge on two fronts.  He said that our country has given a befitting reply to China-Pakistan in Galvan and Balakot.

About the “Quantum Book of Soma”, the Governor said that Soma has been described in the ninth Mandala of Rigveda.  He said that it is necessary for us to know the knowledge of our Vedas and Puranas. The Governor said that the day we start knowing our history, no one can stop India from becoming a world guru.

Garhwal Post has established itself as a credible, balanced and forward looking newspaper in India. Based in Uttarakhand, the daily is read by the aware, socially and culturally responsible, high-income elite of society.
Contact us: info@garhwalpost.in
https://garhwalpost.in/free-urban-dating-sites/