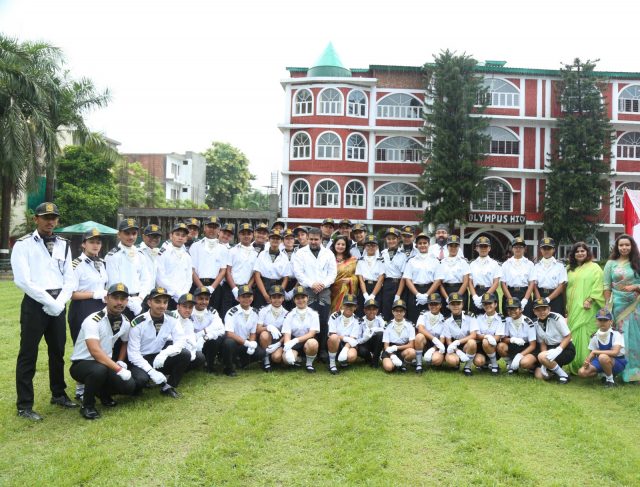 DEHRADUN, 28 Sep: Olympus High organised the Investiture Ceremony within the school premises today. The ceremony was hosted by Siddheshwari Rana, who welcomed the parents and congratulated the upcoming prefects. The program commenced with the ‘Saraswati Vandana’ which was sung by the school choir. Later, all the prefects of the school marched sequentially on the stage to receive the badges from their parents. Mukul Tyagi was presented with the title of Head Boy while Maliha Malla was announced as the Head Girl of the school. Manvi Sharma & Rajyavardhan Singh Bhandari were presented with the title of vice Head Girl & Head Boy respectively. The House Captains were also announced during the ceremony. Parthvi Sachan and Aditya Bhatt were announced captains of Saam House, Malika Dheer and Sandesh Uniyal of Rig House, Nishtha Chaudhary and Owais Qureshi of Yajur House and Suhani Sareen and Aaditya Thakur of Atharwa House. Ankit Kumar was elected as the Sports Captain, Milan Dubey was appointed as the Cultural Head while Tanvi Pundir and Manya Kashyap were selected as the Discipline Head and Editorial Head respectively. The program was then followed by a speech by the Managing Director Kunal Shamshere Malla and Principal Anuradha Malla, which imbued the council members. Later on, all the council members took the oath to exercise their duties well and fulfil their responsibilities. The Head Boy and Head Girl presented their vote of thanks. The program concluded with the singing of the school song.