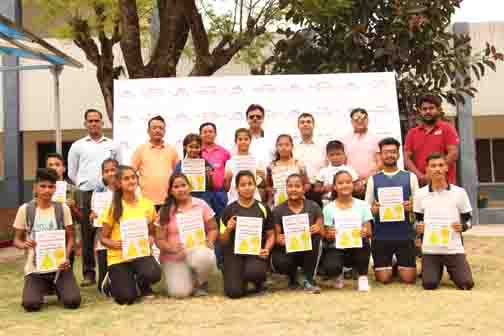 By OUR STAFF REPORTER
Dehradun, 16 Jun: In a closely contested football match, Maa Anandamayee Memorial School, Raiwala (MAMS) defeated Rishikesh Sports Academy at the closing ceremony of the school’s 16 day Summer Camp. Chief Guest Chandrakant Arya, former North Zone Cricket Player, Gopal Thapa and the School Director, Arpit Panjwani, MAMs staff and students participating in the camp were present at the event.
The 16 days of intensive sports and leadership programme at MAMS Raiwala Summer Camp came to an end with a closing ceremony held today. The key highlight of the closing ceremony was the football match played between team MAMS and Rishikesh Sports Academy. MAMS won by one goal. The day began at 6.30 a.m. when the participants assembled in the playground, where the stage was set for the closing ceremony. They were felicitated with certificates of participation a day before by their respective coaches and group photographs were taken. The soccer team started its warm-up session before the match at around 8 a.m. Thereafter, Ignacio Pereyra and Lun Kuki, the MAMS team coach and assistant coach, respectively, gave instructions to the players. The opposite side arrived at around 8.20 a.m. and the Guest of Honour, Gopal Thapa from the Football Referee Association along with the Director met all the players individually to wish them the best.
MAMS scored 3 goals, while RSA scored 2 goals. The goals for MAMS were scored by Vivek Rana and Shivang in the first half. After the interval, the RSA managed to equal the score and, at the last moment, MAMs managed to score a goal and win the match. Prior to the match, the students who participated in other sporting activities like basketball, volleyball, table tennis, cricket, etc., were felicitated by certificates of participation by Chief Guest Chandrakant Arya and Guest of Honour Gopal Thapa.
The Chief Guest said that MAMS had succeeded in developing the playground and sporting infrastructure in the last few years, which was a blessing for children belonging to rural locations like Raiwala. He said that football was an international sport that helped in developing great stamina and vigour. He congratulated the organisers for putting up this event and assured that in the near future this ground would be used for organising state and district level cricket matches.
Director Arpit Panjwani proposed the vote of thanks.

Garhwal Post has established itself as a credible, balanced and forward looking newspaper in India. Based in Uttarakhand, the daily is read by the aware, socially and culturally responsible, high-income elite of society.
Contact us: info@garhwalpost.in
christian dating wellington