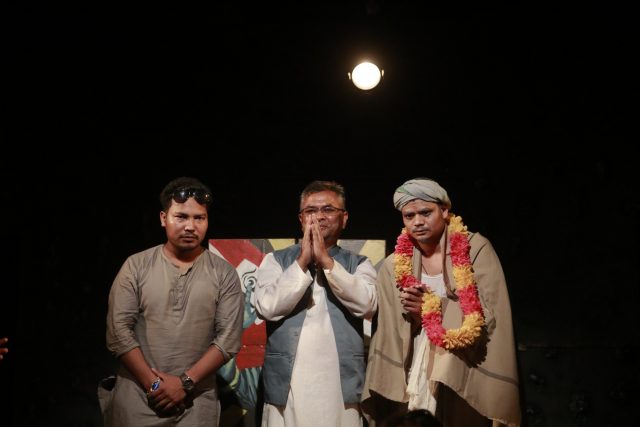 DEHRADUN, 11 Feb: It was the turn of the Nepali play, Mahabhoj, to be staged at the Culture Department’s auditorium off Haridwar Bypass Road as part of the ongoing parallel Bharat Rang Mahotsav being organised across the country by National School of Drama. Mahabhoj, as the name suggests, is based on one of the most famous novels of Hindi Author, Manu Bhandari. Incidentally, she is also the playwright of the play.
The story is a depiction of the unholy nexus between the politicians, the police and the media, and how this creates unrest in society. The story also shows how vulnerable people are trapped in the grip of these elements and become their unwilling tools.
Anup Baral is the Director of the play. He is a post graduate from the National School of Drama and, in his two decade long journey in theatre, he has directed more than 36 plays. He is an inspiration for theatre activists in Nepal.
Baral says that, through the play, his attempt is to depict the weakening of the social fabric as a result of corrupt nexus between the politicians, the police and the media. He also says that he tried to being contemporary relevance to the play through his direction.
The play was staged by the Mandala Theatre of Nepal and the language was Nepali.
The cast included Dayahang Rai, Buddhi Tamang, Ramesh, Rajan Khatiwada, Sirjana Subba Viplob Pratik, Vijay Baral, Somnath Khanal, Pradip Chaudhury, Bikas Joshi, Umesh Tamang, Sapna Chaudhary, Sushma Naraula, Pramila Khanal and Ranjana Oli. Utsav is the Music Director.