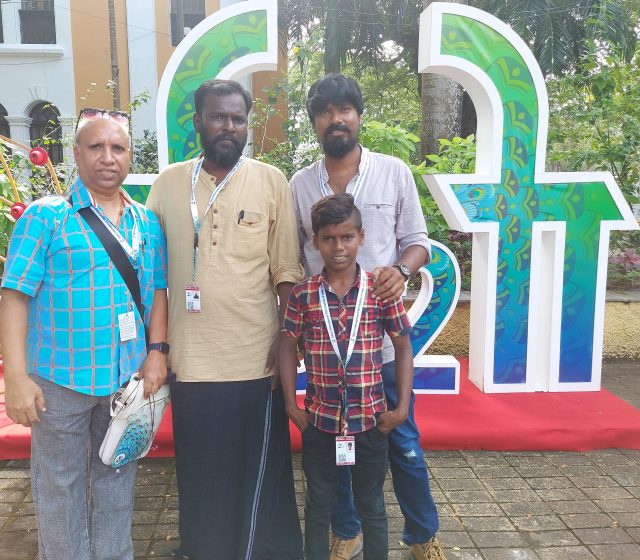 As it was my daughter Iha’s birthday on 20 November, I asked her and my wife, Meenakshi, to go to INOX, Panaji, to witness the first day of IFFI in all its glory.

Travelling from South Goa, where we reside, to North Goa and back is itself a task. If you use the bully taxi union services, you’ll have to shell out 2.5k for a one-way trip. Besides, finding a cab for the return trip isn’t easy either. So, you end up requesting the morning driver if he’d be able to pick you up around 7–8 p.m. 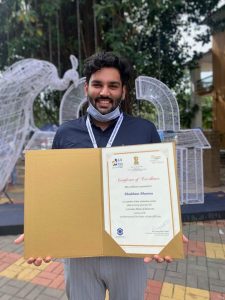 Tourists and visitors to Goa face a significant issue in commuting since the private taxis charge such excessive amounts. Therefore, I humbly suggest that anyone coming to Goa use the Goa Miles app, the most reasonably priced Government affiliated taxi service.

On the said date, my wife and daughter used Goa Miles for a mere 1000 bucks. However, the wait-time for Goa Miles is generally long, and they also had to wait for over an hour to find a cab. The clouds decided to rain on the parade, quite literally, to add to this, and a nonstop downpour followed. 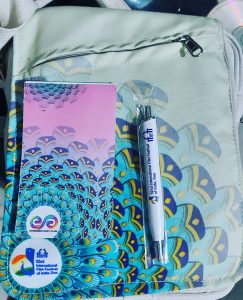 When they reached the venue, I received a call and a full report: nothing was happening there, stalls and decorations were still being set up. Nor were there a lot of attendees in sight, and regular screenings and festival highlights would be open for attendees the next day, 21 November. On the 20th, there was an inauguration ceremony and dance show at the Shyama Prasad Mukherjee Stadium.

So, my wife and daughter decided to brave the rain and head out to lunch and come back home with the same taxi, having discussed a return trip with the driver in the morning, itself. They boarded the cab at around 5:30 p.m. and made it home some 2.5 hours later – a journey that generally takes only an hour. The delay was courtesy of the nonstop rain and a jammed one-way road where they spent close to 2 hours to cover a half kilometre stretch. Thus ended day 1 of IFFI.

I decided to attend the festival on its second day and was set to go at 10 a.m. But, unfortunately, I only found a cab at around 11:30 a.m. Courtesy of letters from Garhwal Post, Dehradun, Uttarakhand, and The South Asia Time from Melbourne, Australia, I’m covering IFFI as a journalist. 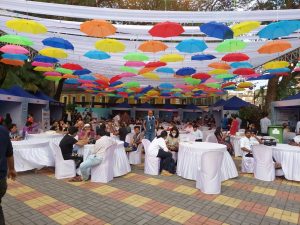 I reached INOX in an hour and requested the driver to come and pick me up around 7–8 p.m. if he was still in the area.
Next to the main entry gate on the left was a stall where I collected my ID card. The booth also sold delegate passes – a one day pass costs Rs 350. Unfortunately, besides some Instagram worthy snaps, there isn’t much you can do with a one day pass. Usually, delegate passes cover 4-5 film tickets. Yet, this time, attendees were required to pre-book their tickets online, so same-day tickets are certainly not going to be available either at the stall or through online booking. This is also applicable to the media persons.

I entered the premises but did undergo cross-checking. The ID card doesn’t say that it belongs to a media delegate. In keeping with the digital times, it features a QR code that reveals the relevant details about the ID card holder upon scanning.
All delegates and media persons receive a cloth shoulder bag that contains a small notepad and a pen with IFFI branding. When I returned home that night, my daughter asked why they were giving away pen and paper in the digital age when they could have been more thoughtful and opted for reusable cloth masks with IFFI branding instead.

In previous years, an IFFI bag has been a constant. But one essential element is a catalogue book of all the films selected for the festival. It would feature information about the actors, producers and directors, including the contact details of the producers. But this crucial set of information has been digitised this year through the IFFI app, which also features the daily screening schedule.
I had not pre-booked any tickets, so I could not attend any screenings. However, as mentioned earlier, the entire venue has been decorated beautifully and calls for shareable, aesthetic documentation.

After entering the premises, I went straight to the building where the media centre used to be. The security guard there told me that the building was locked.

So I headed towards INOX, where many round tables and chairs were set up, which I realised was the Food Court. Eight food stalls line the seating area on three sides. The food fills your stomach, but beyond that, it’s a sober affair. However, there is a stall for beer enthusiasts, which is a must for anyone visiting Goa, known for its lazy idyllic party lifestyle.
I was standing opposite INOX when I heard some commotion to find that the Minister of Information and Broadcasting, Anurag Thakur, was walking out. I wanted to ask him to check the arrangements in the food court, the media room, but I was at quite a distance to catch up with his entourage.

Anyway, I spotted my old friends and present jury members Atul Gangwar and Vishnu Sharma walking towards me. Atul, thinner and fitter now, has great reach within the jury, while Vishnu has joined the jury list for the first time. Atul mentioned that the Indian Panorama jury was holding a press conference at 1 p.m. for which he took his leave. Vishnu had come to Goa with his wife for the first time, so I joined them for a cup of coffee.

At 1 o’clock, we also reached the media room, where the Panorama jury was already seated on the stage. The Chairman of the Indian Panorama committee, a big name from the film sector, SV Rajendra Rao, and other members were in the middle of a debate. Where is the platform to watch the films selected at IFFI? These films receive critical acclaim and awards but find no channel or OTT platforms to screen them to the public. Rao sahib said that they are putting pressure through the government on leading OTT platforms to show their feature films, documentaries and short films.

I remembered a similar press conference ten years ago. Even then, this debate was going on. And it will continue in the years to come. I say this debate is meaningless; when Doordarshan or any equivalent government channel does not show these films, why would any other medium show these films? Now there is YouTube where you can upload your movies. If your movie is good, YouTube’s audience is huge and will instantly lap it up. Previously, Doordarshan would telecast selected feature films, short films, and documentaries in the National Film Festival and IFFI while paying money. I don’t know what the present scenario is.

Some films selected at IFFI receive a good response at international film festivals. Of course, foreign countries also buy good films, documentaries, short films. But I believe that the encouragement from the films selected at festivals prepares us to make our next short or documentary film.

Like I had also produced a short film, Aakhri Munadi (The Last Announcement), in 2001. It was selected in over ten major film festivals. We were shortlisted at the Jersey Shore Film Festival in the USA as well. Although we did not earn any money from that film, Mukesh Gupta, MD, a prominent advertising company Graphis Ads gave us two lakh rupees at that time for the film’s production. Whenever I watch that short film on YouTube, I get goosebumps. I feel immense pride at having made such an excellent film. My friend Ehsan Baksh donned the director’s hat for this brilliant film.

Well, let’s move on. While Vishnu and I were walking around, he pointed to a group of people sitting together. They did not strike me as belonging to the film fraternity. Vishnu greeted one of them and introduced me. He said that the gentleman is a director, while the one next to him is an outstanding actor and that his film Koozhangal is India’s official entry for the Academy Awards. I was pleasantly surprised. After clicking photos with the gentlemen, I read up about the film and watched the trailer. It is a simple film yet pure cinema. If I get a chance, I will talk to them for you, dear readers.

I then headed to the Media Room, complete with workstations, where all the media personnel draft and share their reports and write-ups about the festival. However, it was a total disappointment. Two-three tiny rooms were allotted to the media in the name of the media room. I searched for some refreshments and noticed a small machine in one corner, which a boy was managing. I got myself a cup of coffee when a journalist came and asked the boy for tea and a packet of biscuits. It was then that I realised that biscuits are also a part of the refreshments. I reminisced about the media room from my previous visits and the 5-star refreshments available for all media persons. But I am sure IFFI provided whatever facility was available to them this year.

I saw an SMS from the Press Information Bureau (PIB): at 4.30 p.m., there would be a press conference with five of the 75 brightest shortlisted participants. In the ongoing celebrations of Azadi Ka Amrit Mahotsav, commemorating 75 years of independence, the 52nd International Film Festival of India (IFFI) is hosting 75 creative minds from all over the country shortlisted by a jury committee of esteemed film personalities.

So, I went there and mingled with them. Most of the winners said they had produced their projects using mobile phone cameras and edited the footage themselves. A young man, Shubham Sharma, two of whose projects, a short named ‘Ek Meetha Khilona’ and a music video had been shortlisted, said that the festival had felicitated his talent and increased his enthusiasm tenfold. He now plans to direct a documentary and hopes to be selected at IFFI next year. This recognition has given wings to this dream.

Garhwal Post has established itself as a credible, balanced and forward looking newspaper in India. Based in Uttarakhand, the daily is read by the aware, socially and culturally responsible, high-income elite of society.
Contact us: info@garhwalpost.in
online dating pick up lines for guys