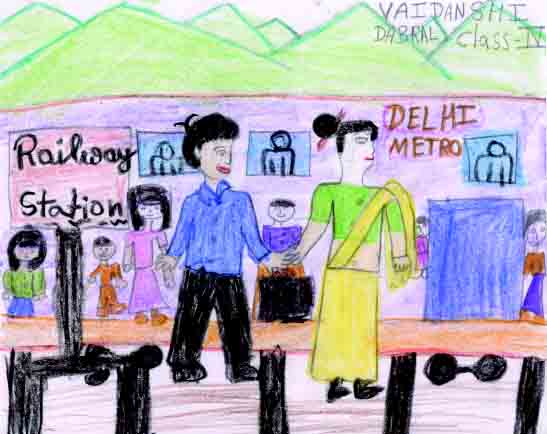 In any train’s second class compartment, one can see the real India. Unity in diversity unfolds like a play. All kinds of people – the middle class, the poor, the quiet, the loud, the good, the bad, the ugly – they all take the front stage, play their roles and exit as the train stops at various station platforms.
This is to share with you what happened during a train journey the other day when a pair of unassuming young men reaffirmed my faith in the goodness of life and kindled hope for the future.
On my way back to Doon from the winter vacation, I had boarded the Mangala Lakshadweep Express at Goa in the early hours. With a confirmed booking for a connecting train from Delhi to Dehradun, everything seemed to be in place and I happily slipped back into the holiday mode. Blissful hours went past, the sun rose, set and rose again as I devoured the rivers and hills of the Konkan Plateau along with the little dramas unfolding in the compartment.
Somewhere along the way the winter fog, ‘kohra’ as it is fondly called in the north, decided to act up and the train lost speed. As it moved north and then west from the warm sunshine of southern Kerala along the cool seashores of Karnataka and Goa and across the plains of Rajasthan and Madhya Pradesh, instead of making up the hour’s delay at Madgaon, it pulled in two hours behind schedule at Gwalior.
“Wonder what will happen?” I said aloud, “If I miss the train…..”
Usually during these long journeys, passengers share not only the space but also their food, fun and family gossip, so a sense of caring and kinship is born. Being a teacher in a village school seemed to ensure a better audience and now all eyes were on me.
“This train stops at Nizamuddin,” I was only too willing to explain, “But the Jan Shatabdi starts from New Delhi! Wonder if I will get enough time to catch an auto and reach there…?”
The more I thought of it, the more difficult and unlikely it appeared. Imagine me with my faltering gait and failing eyesight with a backpack and suitcase to boot, finding my way on a crowded platform! As the years pass and the hair turns grey, what was child’s play once turns monumental. If only the Mangala would make up the time!
“Agra, Mathura and then Faridabad,” said the plump gentleman in the berth across, “Time for a long nap”. As he pulled the blanket over his head, he offered consolation “Don’t worry Madam, when the kohra clears, the train will gain speed.”
“So what,” I said more to myself, “No dearth of buses from the ISBT. Will be home for dinner anyway! The auto shouldn’t get stuck in traffic, that’s all.”
‘Sure, I must be sounding like the proverbial fox who couldn’t get the grapes!’ I thought trying to laugh at the situation.
Unexpectedly, the quiet young man on the upper berth spoke up, “Madam, come with us, we too are going to New Delhi.”
“From there, we will catch the Metro to Mayur Vihar,” added his friend, “We guarantee you won’t miss the train.”
Both Ashwin and Riswan were college students on their way back after appearing for some common entrance test in Madgaon.
“Hope you won’t get delayed because of me,” I said, “Not so fast like you…. and have a bag, too.”
“Madam, don’t worry. You are like my mother!” Ashwin was polite but firm, “Leave it to us, you have a confirmed ticket, right?”
No sooner did the train stop at Nizamuddin, we were on the platform. The race was on. We ran like a movie in fast-forward. Riswan ran ahead like a pilot car. Ashwin pulled my suitcase and I held on to him like a leech. “That one is headed for New Delhi,” said Riswan pointing at one of the umpteen trains, “Shall we get in?”
Up and down the foot overbridge we went and then along the unending numbers of bogies in search of a general compartment to get into. We found one, stepped inside and the train chugged on.
“What’s your train number?” asked Ashwin as we approached New Delhi. “12265, D-5, 39”, I replied instantly. It was my lifeline! Within seconds, he referred to his cellphone and said, “It’s on platform 11 and your coach position is 9.” “How techno-savvy!” I watched in admiration. The world seemed to be at Ashwin’s beck and call, at his fingertips!
“Seven minutes to go!” I thought as the train slowed down and pulled on to platform no. two. Still in the ‘fast forward’ mode, once again, we three went up and down the foot overbridge and headed for platform 11 where the Jan Shatabdi was waiting.
“Train number 12265 is ready to leave for Dehradun from platform no…..,” the departure announcement was on and we were in the last lap of the marathon. “There it is! D-5 !” said the duo and helped me to board and locate my seat.
“This calls for a celebration, you saved my day! I owe you a treat,” I said, discreetly handing over some cash to them. “Do stop by at your favourite eating place.”
“Thank you aunty,” they said equally discreetly rejecting the cash. “We need only your blessings.” Unceremoniously both touched my feet and stepped out on to the platform.
“Thank God! There is still goodness in the world, lots of good tidings waiting for the future! ” My eyes followed the duo till they merged in the crowd. The sun shone brighter as the train gathered speed and headed north.
(The illustration is by Vaidanshi Dabral, a Class IV student of John Martyn Memorial School.)

Garhwal Post has established itself as a credible, balanced and forward looking newspaper in India. Based in Uttarakhand, the daily is read by the aware, socially and culturally responsible, high-income elite of society.
Contact us: info@garhwalpost.in
best online dating for 50