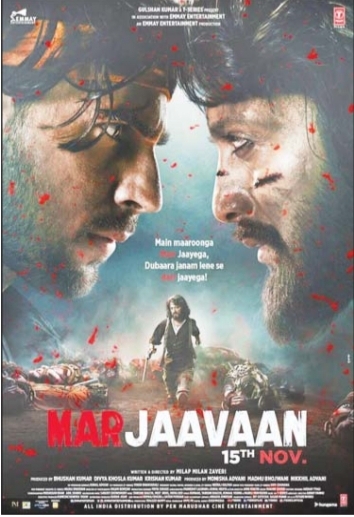 Marjaavaan, is a gone- wrong kind of a masala film. What in fact was the need to make a filmwith a handful of fine actors for a clichéd story that has no head or tail! It comes at a time when the audience has been sporadically treated with savouring doses of good cinema this year. The story of Marjaavaan is suffocating, tossing between few characters and a couple of odd sets. It overflows with boredom and repetitive intentions except for its songs. Abundance of punches, fights in mud and rain, blood spitting from mouth after a hard jolt, good words from hero and venom from villain, unconditional love, hard-core hatred and till-the-last-breath revenge; all culminating into a senseless execution. Originality is always admired. Even if it is less, it should be convincingly entertaining to cover up the weaknesses. Unfortunately, Marjaavaan gives no reason to be termed as an engaging film. As an orphan child’s destiny would have, Raghu (Sidharth Malhotra), is picked by a water tank mafia, Anna (Nassar) from Mumbai roads tobe groomed to become his right hand. He grows into the most loyal and efficient aide and a doer of impossible illegal tasks for Anna, reserved especially for duties that demand washing up the rivals. Anna vouches for Raghu’s credentials, loyalty and confidence but it makes his own son, Vishnu (Riteish Deshmukh) extremely jealous. He develops Film Review undying hatred towards Vishnu. Vishnu’s fate vests in his physical attributes. He is a three feet tall midget, filled with loads of complexes regarding his height yet displays confidence outwardly. Most of his conversations comprise ‘heights’, highlighting his mental makeup. Although he is short but holds a tall vengeance against Raghu. An entry of a beautiful girl with pure intentions for the basti kids and few other happenings change Raghu’s outlook. A usual story unfolds with clash of interests, villain’s attack on the hero realising the vulnerability of a lover in him, unconvincing fight scenes with the beaten ones doing the cart wheels before landing with thud to the ground, the boastful and venomous dialogues by Vishnu and the birth of a wish in Raghu’s heart to change the course of his life. In short, it presents a boring and unimpressive version of many past movies. Sidharth is made to do all the heavy lifting as a passionate lover, a doting son to his godfather, an absorber of all toxic dialogues from Vishnu and is in almost all the fight scenes. The script is weak. In such a scenario, the actor’s helpless plight is apparent. Riteish Deshmukh as a nanus has limitations as a performer but he copes well with the physical disability and shines in his zone. His dialogues are overbearing at places. Repetitive flow of muck from his mouth and incessant fear from Raghu dominates his role. The female cast in Marjaavaan remains second fiddle. Zoya (Tara Sutaria), Raghu’s love, Arzoo (Rakul Preet), a bar dancer, all play their part well. The seductive dance number, Ek Tohkum Zindgaani (a recreated version from 1986 film, Janbaaz) by Nora Fatehi will be admired for her immaculate dance moves. Ravi Kishen has always been a consistent and dependable performer. He is given a small and unimportant role of a police officer. The other supporting cast as Raghu’s close aids are average and their loyalty towards him in the film is not explained adequately. In fact, no action, scene and relationship in the film leaves an impact and mostly remains undercooked, the job left on the audience to wander and figure out themselves the basis behind their functionality. The remixed versions of songs, Ek Toh Kum Zindagani and Kitna Sohna bring the very few feet-tapping moments in the overall dull running. The soulful song, Tumhi Aana sung by Jubin Nautiyal has emotional depth to touch the heart. The lyrics by Kunaal Vermaa are written well and render poetic flavour. Writer-director Milap Zaveri wants to convey many things in one go but fails to convince with clarity even one thing. The fight scenes have no novelty to keep one hooked. And wherever a new thing is tried, it looks funny. Raghu in his first fight twists the neck of the opponent and fits a neck collar instantly, gives a cut on the rival’s face and pastes a bandage on the wound as he continues fighting, he punches someone’s back and sprays the pain reliever at the same time. It’s a ridiculous thought. Every second scene is a fight scene involving Sidharth and he plays his part with utmost honesty but the weakness in direction and choreography mar his performance. It seems lot of efforts have gone in writing the dialogues but they are not up to the mark. Aissa Kabhe Sotcha Na Tha Yai Anjaam Hoga, Ek Waqt Ka Baadsha Aaj Gulam Hoga’, ‘Mandir Or Masjid Dono Milaingay, Guzraiga Is Desh Ke Jis Gali Se, Madad Milay Ge Har Kisi Ko Mango Ali Se Ya Bajranbali Se’, ‘Pata Hai Kameenaipan Ke Height Kya Hai… 3 Foot.’; all are average but not even one is outstanding. Marjaavaan nowhere rises beyond being an average performer. The odious revenge- n-hatred drama nowhere beguiles the audience as it stays in the same rut all through its long running. The movie can be skipped.

Garhwal Post has established itself as a credible, balanced and forward looking newspaper in India. Based in Uttarakhand, the daily is read by the aware, socially and culturally responsible, high-income elite of society.
Contact us: info@garhwalpost.in
over 40s dating https://garhwalpost.in/men-dating-trans-women/