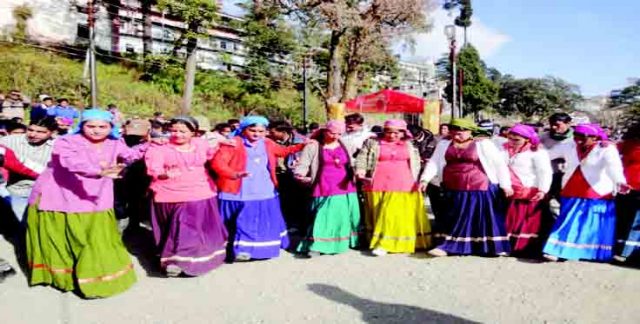 By Sunil Sonker
Mussoorie, 13 Jan: The traditional folk culture of Jaunpur, Jaunsar and Rawaii areas of Uttarakhand was on display at the Maroj Festival celebrated here and in nearby areas. The people danced to the playing of traditional instruments. Important aspects of the celebration were the festive sports and dances like the folk dances, ‘Barada Nati’/Harul/Raso. Like ‘Magh Mela’, which is the most important festival of the Jaunsaris, it is marked by an animal sacrifice ritual, which celebrates the killing of ‘Maroj’, a demon who, according to local legends, stalked the valleys for years.
SS Rawat, a local, said that the culture of the local Jaunsari tribe is distinct from other hill tribes in Garhwal, Kumaon and Himachal Pradesh, a fact demonstrated by the presence of polygamy and polyandry in the local traditions, with richer tribesmen practicing polygamy, while their poor counterparts choosing to share a wife (polyandry), though the husbands should be brothers, which is often connected to the five Pandava brothers in the Mahabharata marrying Draupadi, from whom Jaunsaris trace their ethnic origin. He further said that anthropological studies in the 1990s revealed that these practices were fast phasing out and being replaced by monogamy.
During festivals, people wear the Thalka or Lohiya, which is a long coat. The dancers – both boys and girls – wear colorful traditional costumes. Bissu is an important festival of Jaunsaris and Bawars. Meanwhile it was also seen that some clusters of villages around Jaunpur region adjacent to Mussoorie are not keen on celebrating the festival due to the escalating costs and high inflation, forcing them to stop it completely. The Jaunpur Block of district Tehri Garhwal consists of several smaller clusters known as pattis, out of which half of the area that comes under Pali Gad along with Silwar patti, Idyalsu patti, Dus Jula and Saklana patti have stopped celebrating the festival completely. The major reason to stay away from festivities is the practice of goat sacrifice, as one goat now costs too high. Earlier, every household in the village used to buy a goat for sacrifice and the meat was shared among the villagers equally for the whole month of January. However, over the years, the escalating price of the goat to be sacrificed has put it beyond the reach of the poor villagers in the above-named pattis, thus resulting in the extinction of the practice.
Rawat opined that the whole exercise of celebrating the festival had become too costly. Therefore, the decision was taken at a panchayat meeting two years back to stop celebrating the festival. In addition to that, the migratory nature of the population has meant that very few villagers make it on time for the festival, thus forcing the elders to abandon the practice. 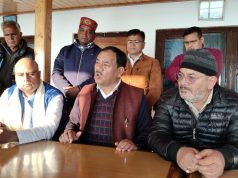 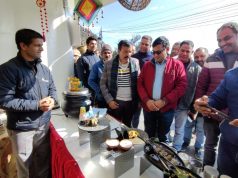 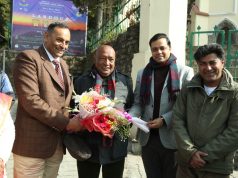 Garhwal Post has established itself as a credible, balanced and forward looking newspaper in India. Based in Uttarakhand, the daily is read by the aware, socially and culturally responsible, high-income elite of society.
Contact us: info@garhwalpost.in
meeting a new guy