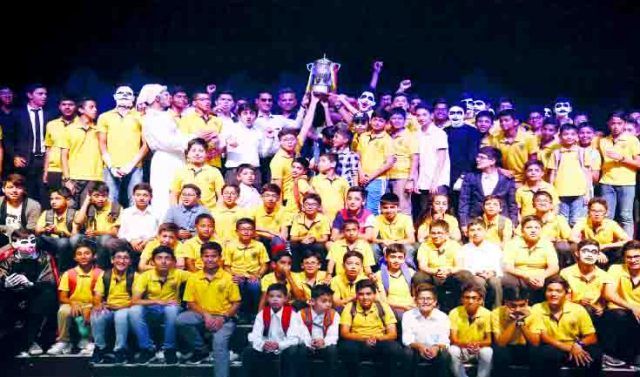 Mussoorie, 30 Jun: On the second day of the Play Competition in St George’s College here, today, ‘The Berlin Oval’ was presented by Gateley’s House and ‘A Christmas Carol’ by Marthins’ House.
The cast of ‘The Berlin Oval’ included Nitin Dalmia as the General, Rishi Tiwari as the Colonel, Parth Jindal as the Brigadier, Aryan Budhiraja as the Commander, Daksh Narang as Simpkins and NirvicBasnyat as the Emperor.
The cast of ‘A Christmas Carol’ included Abhijeet Choudhary as Ebenezer Scrooge, Pragun Negi as Jacob Marley, Diavid Payeng as Ghost of Christmas Past, Yuvraj Tokas as Ghost of Christmas Present, Suryadeep Jadeja as Ghost of Christmas Future, Samarth Malhotra as Bob Crachet and Joel Lopez as Mrs Crachet.
The criteria for evaluation included clarity, expression, gestures, stage coverage and effects such as lights, music, costumes and overall appeal.
Evaluated by a panel of eminent judges, Marthins’ House was declared the winner of the competition while Tapsell’s House secured the Runners Up Trophy. Principal Bro Tomy Varghese addressed the gathering and expressed his sincere appreciation to the judges. He lauded the efforts of the teachers and students saying that such events fostered the overall development and growth of the individual.
The evening came to an end with the presentation of mementos of appreciation to the judges.