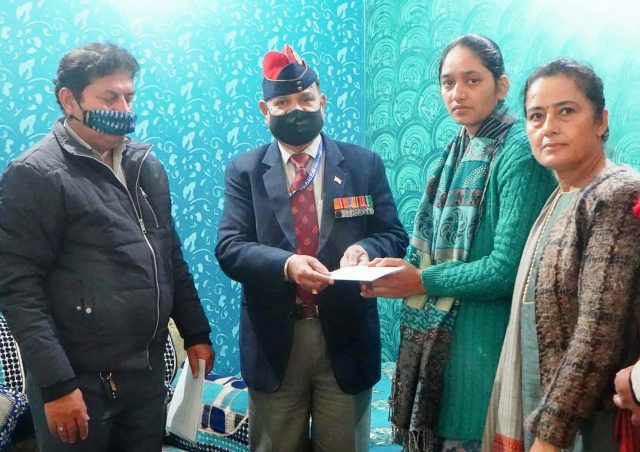 Dehradun, 4 Jan: Graphic Era Deemed University has announced it will bear the entire education expenses of the children of Martyr Harendra Singh Rawat. A team of Graphic Era went to the house of the martyr, today, and handed over a letter to his wife in this regard.
The brave Havildar of the Rashtriya Rifles, Harendra Singh Rawat, had made the supreme sacrifice while fighting militants in Jammu and Kashmir. Both his children study in class five and three at Graphic Era Global School. The martyr’s family returned to Dehradun a few weeks ago from their village.
After receiving information about the martyrdom, President, Graphic Era Educational Group, Dr Kamal Ghanshala, while paying homage to the martyr, said that the entire country is indebted to the braveheart. “The entire Graphic Era family stands with the family of Martyr Havildar Harendra Singh Rawat,” he declared. In the martyr’s honour, complete arrangements for the education of his daughter and son up to graduation level will be done through Graphic Era free of cost. After this, if they wish to study engineering, management, computer application, etc., in any campus of Graphic Era Deemed University or Graphic Era Hill University, the entire course would be free for them.
Registrar of Graphic Era Deemed University, Major General OP Soni (Retd), along with a team of Graphic Era, reached the martyr’s house and handed over a letter to his wife, Lata Rawat, in this regard.
Director (Infra) of Graphic Era, Prof Subhash Gupta, Principal of Graphic Era Global School Shalini Rawat and Kajal were also present.
Describing this initiative of Graphic Era as a big support, Lata Rawat said that Dr Kamal Ghanshala had freed her from the big worry of the children’s education.