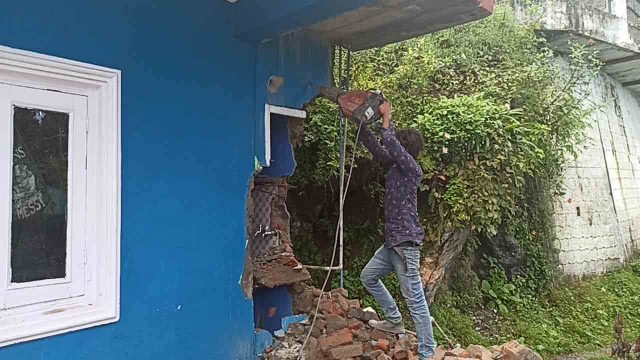 By OUR STAFF REPORTER
Mussoorie, 2 Sep: An illegally constructed house on the Club Mahindra Road was demolished by a team of the Mussoorie Dehradun Development Authority in the presence of a heavy police force. Assistant Engineer Atul Gupta said that, under the orders of SDM Mussoorie Manish Kumar, the unauthorised two-room house had been completely demolished. He said that unauthorised constructions in Mussoorie would not be tolerated under any circumstances. Many times the authority has urged people to get maps approved before construction.
The owner of the house, Kaviraj, said that the poor are being targeted by the Authority. He said that the law should be equal for all. A large number of illegal constructions were underway in Mussoorie these days, but neither the authorities nor the SDM was taking action against them.