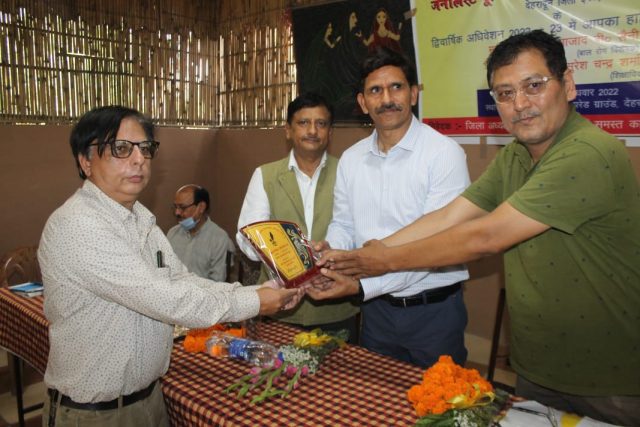 By Our Staff Reporter
Dehradun, 11 May: Dr Azad B Saini, a leading paediatrician of Dehradun, said today that media has an important place in the process of development of any nation. Journalists show the mirror not only to the government but also to society. Dr Saini was speaking as the Chief Guest on the occasion of the biennial convention of the district unit of Journalists’ Union of Uttarakhand (JUU), organised at a restaurant located near Parade Ground.
Dr Saini said that journalists ought to make every effort to make society aware of the situation and also give direction to it for nation building. Praising the media, he said that whenever any government has tried to implement anti-people policies, the media has strongly opposed it by becoming the voice of the people and the government has had to beat a retreat. The media has a strong role to play in strengthening democracy and that’s why it is called the fourth pillar of democracy.
Special Guest and Educationist Suresh Chandra Joshi said that journalists have played an important role in the country as the fourth pillar of democracy and even before the independence of the country by actively participating in the movement for democracy and by inspiring people to join the independence struggle. People of the country were aware of what was happening around only because of the media. Joshi also recited a poem in praise of the media’s role in nation building. Social activist Lokesh Navani lamented that journalism had become a business rather than a mission but said that credibility of the print media is still high.
Former State President of JUU, Arun Pratap Singh said there are many new challenges for media persons in the present times. Combating fake news and bringing truth before the people has become a challenge in the wake of ever mushrooming social media platforms. He also said that JUU is actively struggling to take the problems faced by the media persons as well as the publications before the authorities and try to get them resolved. It had always also opposed any attempt by the establishment to suppress the media.
Senior journalist and former State President of JUU, Jai Singh Rawat said that the journalists need to be united in order to claim their rights and lamented the fact that, while the number of organisations of journalist is going up, they not united and never put up a joint fight for the rights of media persons.
State General Secretary Girish Pant briefed members on the activities of the Union and the efforts being made by the Union’s State and District Units towards resolving the problems faced by the journalists and also reminded them of the meetings held with the Chief Minister in this regard, as also with the Press Council Members and officials of RNI and the DAVP.
On this occasion, State President of the Journalists’ Union Umashankar Praveen Mehta blamed the government for not forming the Press Accreditation Committees even after 22 years of the state’s formation. He said there is need to look inwards too rather than blaming the government for every problem.
District President Chetan Khadka lamented that, while the media persons lent a voice to the voiceless and highlighted the problems of others, they were reluctant to highlight their own problems in their publications.
District unit general secretary Avnish Gupta spoke about the various activities of the district unit. On this occasion, senior journalists Manmohan Lakhera, Sanjeev Sharma, Shah Nazar, Adheer Mukherjee, Deepak Gupta, Sanjeev Pant, Chetram Bhatt, Lalita Baluni, Sanjay Bhatt, Girish Tiwari, Pradeep Rohila, Mukesh Singhal, KS Sidhu, Bhanu Kala were also present.

BOX-
Shahnazar elected District President of JUU, Shirshwal, GS
Dehradun, 11 May: In the second session of the convention, elections were held for the Dehradun district unit. Shahnazar was unanimously elected as the district president of the Dehradun unit. Moolchandra Shirshwal was elected to the post of General Secretary, while Jyoti Dhyani Bhatt was elected Treasurer. The new district president and the general secretary were given the authority to nominate other members of the district executive committee. Senior journalist Sanjeev Sharma was the election officer on the occasion, while Abhinav assisted him as assistant election officer and they oversaw the process of the unanimous election. On this occasion, a large number of journalists including Virendra Dutt Garola, Sanjeev Sharma, Sanjay Pathak, Dwijendra Bahuguna, Deepak Gupta, Adheer Mukherjee, Khalid, Poonam Bhandari, Satish Chauhan, Trilok Pundir, Sanjeev Pant and Lalita Baluni were among those present.

Garhwal Post has established itself as a credible, balanced and forward looking newspaper in India. Based in Uttarakhand, the daily is read by the aware, socially and culturally responsible, high-income elite of society.
Contact us: info@garhwalpost.in
bwwm relationships blogs dating website for artists famous dating apps