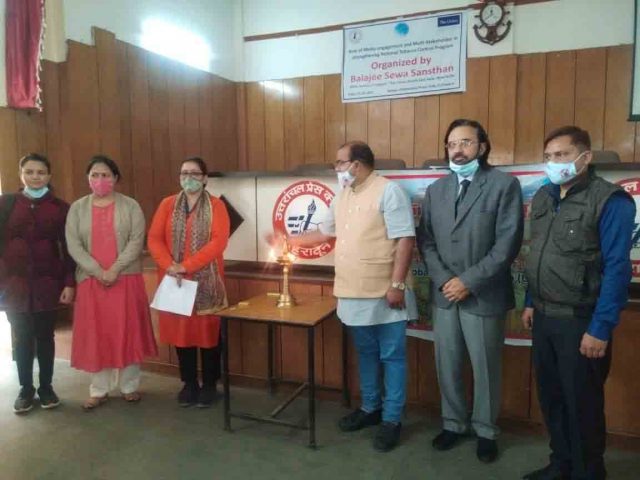 Dehradun, 23 Feb: The Balajee Sewa Sansthan (BSS) interacted with media representatives here, today, on the ‘Role of Media and Multi-Stakeholder engagement in strengthening National Tobacco Control Programme’ and how media could be an effective tool in ensuring a Tobacco-Free Kumbh Mela in Haridwar. The Mission Director, National Health Mission, has already ordered making the mega event tobacco-free.
In this regard, Awadhesh Kumar, Director, Balajee Sewa Sasnthan, shared that they are going to conduct training of police officials on 24 February at the initiative of the IG, Kumbh. The Sansthan has been working in all 13 districts of Uttarakhand for effective implementation of the Cigarettes and Other Tobacco Products Act 2003 (COPTA).
It was reminded that, to effectively control tobacco use in the country, the Government of India enacted the comprehensive tobacco control legislation, namely ‘The Cigarettes and Other Tobacco Products (Prohibition of Advertisement and Regulation of Trade and Commerce, Production, Supply and Distribution) Act, 2003’. India also launched the National Tobacco Control Programme in 2007 with mass media as an important component. The role of mass media has been critical to the evolution of effective tobacco control interventions in this century.
During the talk, Dr Rana J Singh, Deputy Regional Director, The Union South East Asia, New Delhi, shared that tobacco use is a major risk factor for many chronic diseases, including cancer, lung disease, cardiovascular disease and stroke. It is one of the major causes of death and disease in India and accounts for nearly 1.35 million deaths every year. India is also the second largest consumer and producer of tobacco. A variety of tobacco products are available at very low prices in the country. Nearly 267 million adults (15 years and above) in India (29% of all adults) are users of tobacco, according to the Global Adult Tobacco Survey India, 2016-17. The most prevalent form of tobacco use in India is smokeless tobacco and commonly used products are khaini, gutkha, betel quid with tobacco and zarda. Smoking forms of tobacco used are bidi, cigarette and hookah.
During the programme, a factsheet titled ‘Excise and Tax Violation by Tobacco Companies and Smuggling of Tobacco Products’ was released jointly by REACT (Research Action For Tobacco Control), Uttarakhand Tobacco Free Coalition and Abhiyakati Society. This factsheet is an attempt by REACT to inform people about the severe loss to the economy due to such violations. REACT has reviewed all publicly available government sources like The Comptroller and Auditor General of India (CAG); Directorate of Revenue Intelligence (DRI); Central Board of Indirect Taxes and Customs (CBIC), Central Economic Intelligence Bureau (CEIB); and Parliament reports and found tobacco companies including prominent cigarette and pan masala companies evade tax or misreport revenues and cheat the government.
Information was given on the Uttarakhand Tobacco Free Coalition, its need and members. A UTFC meeting was held on 22 February and was attended by Dr Rana J Singh; Dr Pradeep Aggarwal, Professor at All India Institute of Medical Sciences (AIIMS), Rishikesh; Dr Bimal Kant, intellectuals, academicians and many NGOs.
The event today was attended by Dr Bimal Kant Nautiyal, Anil Agnihotri and many intellectuals.