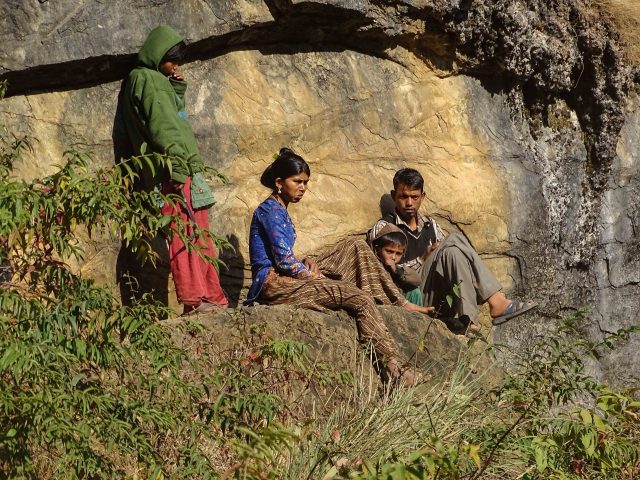 By Eva Badola
The mist of night cleared to reveal a cold winter morning. Panoramic sunrays illuminated the elevated bridge suspended between the two nations, India and Nepal. Several times, I had crossed this bridge equally spell-bound, witnessing the magical confluence of two Himalayan Rivers, Kali and Gori. I was excited to rush to the Jauljibi market to interact with some Van Raji tribal people that had compelled me to travel this far. At the confluence resides a small trading town –Jauljibi – in Pithoragarh district of Uttarakhand. The typical Jauljibi market morning buzzed with locals, vendors and travellers crossing the bridge. Draped in contemporary Indian style of clothing, the Raji tribe sharply distinguishes itself from the crowd with distinct physical features. 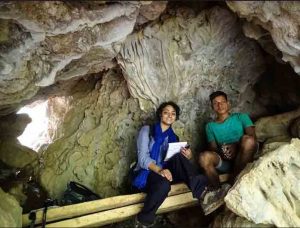 Usually, tribes are earmarked for their shyness and the Van-Raji express this trait to an extraordinary extent. With curved forward shoulders, avoided eye-contact and communication, rarely negotiating over the prices of their forest produced fuel wood or wages; they possess a slumbering calmness.  Every morning, groups of Raji Women with bundles of logs on their heads trek down a mountain, then walk 1.5 kms to reach the Jauljibi market to sell wood to the local Dhabas. I recall first cautiously approaching Van-Raji women to break into their queer shyness. As I began interacting with them, an intriguing picture of the Van-Raji tribe emerged.
Historically, the tribe wandered in forests and lived in caves across the mountains up to the lower Kumaon belt, until they were administratively settled in fixed places. Often characterised as cave dwellers, magic practitioners and ethno-medicinal users, this particularly vulnerable tribal group elicits great curiosity in the modern world. The tribe, with merely 690 population (2011 statistics), dwells in twelve villages in three districts of Kumaon. In smaller portion, they also inhabit Western Nepal.
To better understand their way of life, I decided to visit Kimkhola village with the highest numbers of Van Rajis – 34 families. After hitch hiking on a tractor trolley from Jauljibi to Kimkhola, I walked a steep, treacherous trail from the road head leading to the Van-Raji settlements in the upper part of Kimkhola. Since a reserve forest stretches out from the upper region of the village, the entire dependency of Van-Rajis for forest produce is on the forest. A bird’s eye view of Kimkhola gave the impression of a poorly settled village. Stone stacked walls coarsely plastered with earth and the leaking cemented roofs were craving for heavy repair.
Gopal Singh Rajwar, a Van-Raji lad, after much persuasion reluctantly became ready to show the prominent caves in Kimkhola. I was led over some steep walks and taken aback at seeing caves of varied shapes and sizes. Mesmerising cave structures hidden under untamed wild vegetation. The mild rocky slopes in the area had substrates of organic matter allowing a diversity of plants to grow on them. The first cave I came across had a mouth of 3.86 metres width and 3 metres height, which could easily accommodate around twenty people. However, the deserted cave had gathered humus all over making the grip of shoes on its floor a difficult task.
The largest and most magnificent cave was the one formed out of limestone deposits, while the darkest slit opened cave was a roosting ground for bats. As we continued exploring the caves hidden behind the thick bushes and difficult rocky structures, some were found less spacious and close-ended, but others provided natural conditioning in the scorching heat, as the cool moist air drifted across their two-sided openings.
Gopal then led me to his ancestors’ cave to show how the interior parts of the cave were secured by children and women and the males occupied the exterior part as the guardians of the family, while goats were tied at the entrance. On our way back, I met a 60 year old Van-Raji woman, Chanda Devi, who roughly 20 years ago lived in cave. She recalled her childhood spent as a nomad, wandering across the forested areas with her family and seeking refuge in the caves.
Back home, impressions of Van Rajis – the cave dwellers and their dwellings – still linger deep in my memory.
(Eva Badola is a researcher, explorer and author of book, ‘Stories of Success:  Narratives from a Sacred Land…’. She engages in studying human-nature interactions along Himalayan to Coastal landscape.)