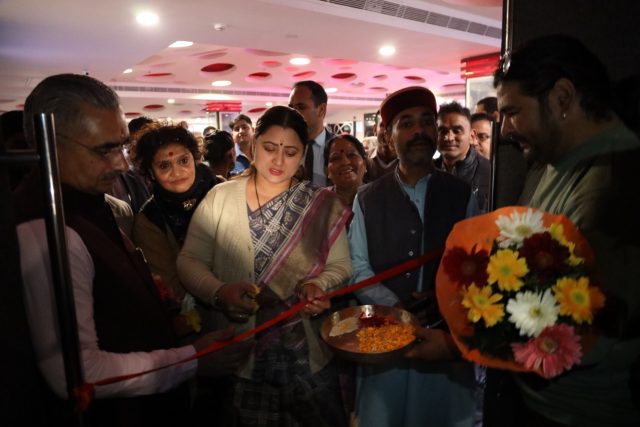 By Our Staff Reporter
Dehradun, 2 Dec: The much-awaited Garhwali film, ‘Meru Gaon’ premiered at Silver City in the capital on Friday. It was a houseful show. Tremendous enthusiasm was seen in the audience for this film.
The film was inaugurated by Chief Minister Pushkar Singh Dhami’s wife, Geeta Dhami, Mayor Sunil Uniyal Gama, Director General, Information, Banshidhar Tiwari, popular folk singer Narendra Singh Negi, and Uttarakhand movement leader Ravindra Jugran. Many other dignitaries were also present.
Meru Gaon seems to have ushered in a new era of Uttarakhandi cinema. The film had a burst of emotions along with tremendous humour. At the end of the film, the audience was left stunned and many could not hold back their tears. Also, the melodious music and meaningful dialogues kept the audience glued to their seats.
The lead actor, Rakesh Gaur, carried the entire film on his shoulders. The superb comedy of Ramesh Rawat and Nisha Bhandari left a special impact. Suman Gaur looked very natural. The work of the three child actors was also amazing. The film effectively portrays the plight of the villages in the mountains from the golden age when the villages were alive to the dying villages today. Also, surprisingly, there is a tremendous debate on the issues of migration and demarcation.
The writing and direction of the film is by well-known Director Anuj Joshi. The producer is Rakesh Gaur. Lyrics are by Narendra Singh Negi and Jitendra Panwar. Music is by Sanjay Kumola and Cinematography by Rajesh Raturi. Rakesh Gaur, Madan Duklan, Gokul Panwar, Gambhir Jayada, Ramesh Rawat, Geeta Uniyal, Suman Gaur, Nisha Bhandari and Ajay Bisht are among the main cast.