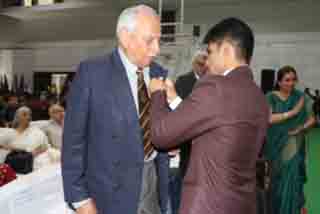 DEHRADUN, 4 Oct: The Welham Boys’ School is hosting the 3rd edition of the annual Military History Seminar on 4 and 5 October. Having taken the initiative to expose its students to India’s post-Independence history on a regular basis almost three years ago, Welham Boys’ has been inviting students across the country to also share in the experience and expand their own horizons. Last year, syndicates comprising a team of five students from a record 39 schools from across India participated in the 2nd Military History Seminar. “The Welham Initiative is a well-deserved sobriquet. For a school to conduct this event on an annual basis speaks volumes for its commitment towards nation building. You have some of the most sought after people as resource people interacting with students and the takeaway for participating schools is indeed most remarkable,’ said KVK Murthy, who had made a presentation on the complex geo-politics of Central Asia, last year. In this year’s edition, the Chief Guest was Air Marshal KC Cariappa (Retd), the son of India’s first Army Chief, who himself spent his formative years at Welham Boys’ before moving to Lawrence School, Sanawar. Later, having joined the IAF, ‘Nanda’ while flying a Hawker Hunter during the 1965 Indo-Pak War, ejected over enemy territory and was a Prisoner of War. Field Marshal Ayub Khan, the then President of Pakistan, famously sent General (later, Field Marshal) Cariappa a message saying he needn’t worry, his son would be looked after. General Cariappa promptly replied that all Indian POWs with Pakistan were his sons and he expected Ayub Khan to look after all of them. Taking inspiration from Field Marshal Cariappa’s response, the opening talk show focused on “Ethics and Leadership”. The opening segment was anchored by the highly acclaimed author who has done yeoman work in the field of military history, Shiv Kunal Verma. The other participants in the discussion, along with Air Marshal Cariappa, were Darshan Singh, Chairman, Welham Boys’ School, former Air Chief, Air Chief Marshal AY Tipnis (Retd) and Colonel Vivek Sharma, the present commandant of RIMC. It proved to be a unique opportunity in which resource people, who are stalwarts, all came together to share their experience and ideas with the students – the future generation. Principal Dr Gurmeet Bindra pledged her commitment to the nation by asserting, “Each edition of the Military History Seminar gives an opportunity to set higher benchmarks by delving into topics of acute concern, celebrating real life heroes and promoting informed citizenry.” Lt General Rakesh Loomba along with Group Captain Johnson Chacko, a former MiG 25 pilot, and Wing Commander Rajesh Khosla, who specialises in photo interpretation, discussed the importance of Military Intelligence. Artists from various schools used the medium to put their message across while an innovative slogan writing contest will also be held. Under the tutelage of Shibani Arora, the WBS music teams gave renditions that further enhanced the experience of student delegates. Lt General KJ Singh, former Western Army Commander, made a presentation on three Indians who fought Aurangzeb at the same time – Shivaji, Lachit Bhorphukan and Guru Govind Singh – before aiding the ‘Government of the Day’ in a ‘Parliamentary Debate’ on an Integrated Command System for the future. The Opposition was guided in its counter by a top cop from Kerala, Sudesh Kumar, who has specialised in Coastal Security post the 2008 Mumbai Attacks. One of the biggest names in conservation, Bittu Sahgal (Publisher of Sanctuary Asia and the man responsible for ‘kids for tigers’ movement, talked about the Armed Forces and Conservation, reiterating that the threat to the country from within is perhaps just as dangerous than any external threat. Lt General Mohinder Puri, who played a key role during the Kargil War, will introduce a film on Kashmir – Baramula to Kargil – that gives an idea of the existing ground situation in the Valley. Another presentation on the Pt 5700 Battle by Gen KH Singh, which was fought in the Turtuk Sector in 1999, will also be held. “It has been an education for all of us. There is no doubt in my mind that the younger generation is indeed more than ready to be exposed to critical subjects like Military History which unfortunately does not form a part of our present curriculum. Why is it that Indian children do not know our Military History? Hopefully the day is not far when it will be an integral part of our Educational System,” says Darshan Singh, the person who is behind the movement. Air Chief Marshal AY Tipnis will preside over the closing ceremony on 5 October.