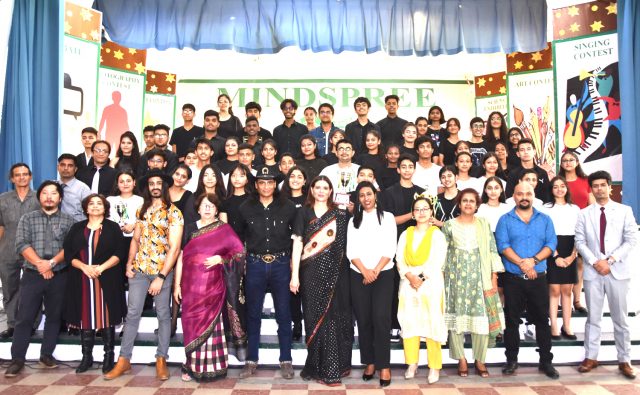 The contest was judged by Ricky Cash, Ragini Shukla and Anthany Gangmei.

The judges thoroughly enjoyed the performances.

In the English Duet Singing Category, songs like, ‘Baby when you are gone….’,’Island in the stream….’, and ‘The last time’ were sung. Aryan Singh and Anshika Chauhan from St Thomas’ College mesmerised everyone with their soul stirring voice and were declared the winners. Harshvardhan Bhatt and Adya Singh of Shri Ram Centennial School came second. Rachael Scott, Ishaan Semwal of St Jude’s School and Naomi Ross and Ishita Shah of Wynberg Allen School came third together.

The theme for the Group Singing Category was ‘Most popular bands of all time’ which included ‘Another brick in the wall….’,’Mama Mia…’,’Love will keep us alive….’and ’21 Guns’.

The dancers of St Jude’s School entertained the audience with the Salsa dance, the Haka dance from New Zealand and Kabuki dance from Japan.

The Chief Guest gave away the prizes. In his address, Bobby Cash appreciated the students’ singing and dancing. Cash also took everyone on a melodious journey with a rendition of his songs. His son, Ricky Cash, an ex-Thaddeusian, also entertained the audience with a song.

The programme concluded with the vote of thanks by Principal VR Gardner.

Garhwal Post has established itself as a credible, balanced and forward looking newspaper in India. Based in Uttarakhand, the daily is read by the aware, socially and culturally responsible, high-income elite of society.
Contact us: info@garhwalpost.in
date transwomen