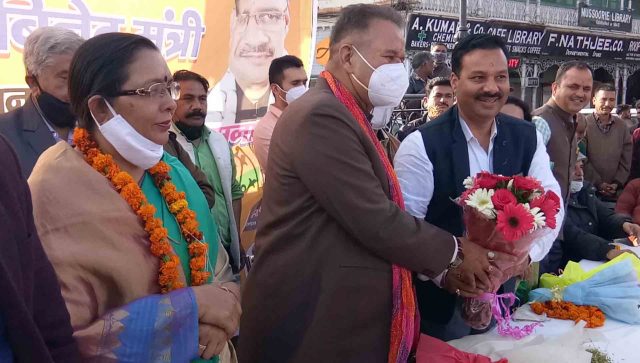 By OUR STAFF REPORTER
Mussoorie, 14 Mar: MLA Ganesh Joshi reached Mussoorie for the first time after becoming a minister. He was given a grand welcome by various organisations of the town at Picture Palace chowk, Green Chowk, Gandhi Chowk and Jhulaghar Chowk with flower garlands.
Cabinet Minister Ganesh Joshi greeted all the people with folded hands. After reaching the Martyrs’ Memorial, he paid floral tribute. He also paid floral tribute at Ambedkar Statue at Ambedkar Chowk. Ganesh Joshi became emotional after seeing the love of the people in Mussoorie.
Ganesh Joshi said, “Whatever I am today is due to the love and blessings of the people of Mussoorie. If they had not made me an MLA, I would not have become a cabinet minister.” He said that Chief Minister Tirath Singh Rawat, State BJP President Madan Kaushik and the top leadership had given him an onerous responsibility and he would try his best to contribute to the development of the state. He said now there is a team of 11 people in the state, and it would be able to score a definite goal in 2022 under the leadership of Chief Minister Tirath Singh Rawat.
He alleged that the Opposition is shocked at the BJP’s new team, due to which it is making baseless allegations. He said former Chief Minister Trivendra Singh Rawat would soon be seen in a top position in the BJP. The former CM had launched various schemes for the development of the state, which would be completed by the present government. The BJP is the only party that meets the expectations of the people, he asserted.
Present on the occasion were Mussoorie BJP President Mohan Petwal, Kushal Rana, Deepak Pundir, Pushpa Padiyar, Ramesh Kanaujia, Sapna Sharma, OP Uniyal, Amit Bhatt, DP Panwar, Ashish Joshi, Abhilash, Anil Singh, Anita Saxena and many others.