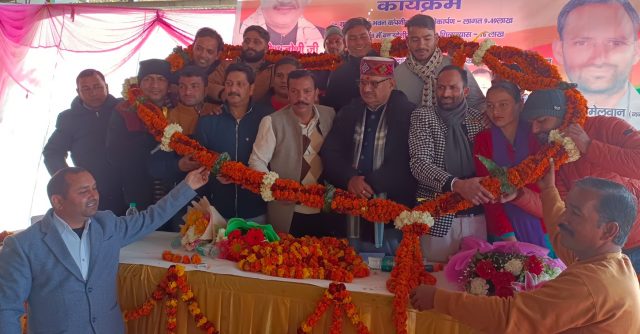 By Sunil Sonker
Mussoorie, 7 Jan: Cabinet Minister Ganesh Joshi, today, laid the foundation stones and inaugurated various schemes worth Rs 136.99 lakh in the Chamasari area. Earlier, in a programme held in the community hall of Chamasari, village head Narendra Singh Melwan welcomed the cabinet minister with a garland of flowers and a shawl, along with other local public representatives.
On this occasion, the demand for road construction in the area was placed before the cabinet minister. The Gram Sangathan Bhawan, Company Bagh, constructed at a cost of Rs 9.49 lakh, was inaugurated by the Cabinet Minister. The foundation stones for a multipurpose building in Khetwala village to be built at a cost of Rs 16 lakh, the Barlowganj Chamasari motorway to be built at a cost of Rs 97.3 lakh, and for the construction of community building in Chamasari village, were also laid.
Addressing the gathering on the occasion, the Minister said that he had fulfilled his promise after laying the foundation stone of the Barlowganj-Chamasari motor road. He said that inaugurating and laying the foundation stones of development works costing Rs 1.5 crore in a small village was a reflection of the speed of development taking place. He claimed that continuous work is being done by the government to make women self-reliant. The government is also promoting vocational education.
Present on this occasion were Narendra Singh Melwan, Mussoorie BJP Mandal President Mohan Petwal, Kushal Rana, Arvind Semwal, Rakesh Thakur, Tanmeet Khalsa, Veer Singh Chauhan District Panchayat member, Anuj Kaushal, former BDC member, Itwar Singh Ramola, Rajpal Melwal, Neelam Many people including Melvan, Amit Pawar, Deepak Bhatt, Roshan Lal Dabral, Amar Dev Bhatt and Dinesh.