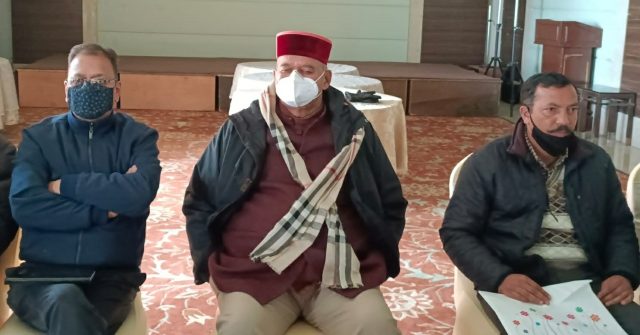 By Our Staff Reporter
Mussoorie, 12 Jan: Cabinet Minister Ganesh Joshi held a meeting with BJP workers here, today, and chalked out a strategy for the upcoming elections. He also directed all the workers to strengthen each booth.
He reminded that the BJP’s policy is that, if the booth is won, the election is won. All the workers should be focused at the booth level and publicise the party’s welfare schemes along with the development work. Talking to reporters, Ganesh Joshi said that, in the last 5 years, the BJP state government had worked continuously for development, while the Centre has also given thousands of crores of rupees for this purpose. He said that the opposition is constantly asking him what works had been done by him for Mussoorie.
In response, he listed works like a drinking water scheme of Rs 144 crores, construction of parking, town hall, etc. He said that, when Congress is in power, it stops listening and when it is out of power, it stops seeing. He expressed confidence that on 10 March, once again, the BJP would form a government with an absolute majority in the state under the leadership of Chief Minister Pushkar Singh Dhami.
Present on the occasion were Mussoorie BJP President Mohan Petwal, Kushal Rana, former Municipal Chairman OP Uniyal, Pushpa Padiyar, Sapna Sharma, Neha Joshi, Abhilash, Amit Panwar, Gambhir Panwar, Ramesh Khanduri and many others.