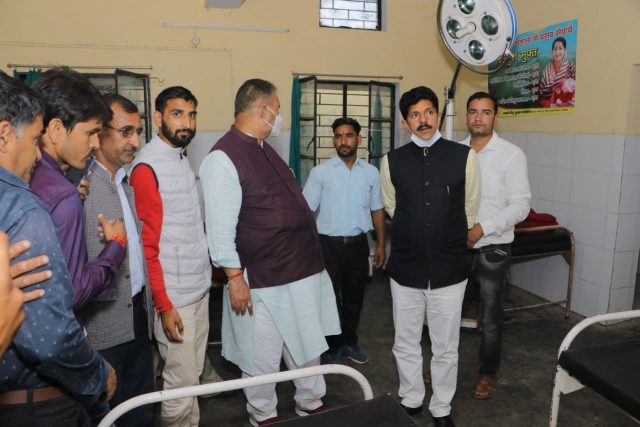 By Our Staff Reporter
Mussoorie, 1 Sep: Cabinet Minister Ganesh Joshi today conducted a surprise inspection of the primary health centre in Nainbagh, Tehri Garhwal, following complaints made by local residents. During the inspection, the staff at the health centre was found absent. Joshi was told by the villagers that no doctor had come to the centre for the last 3 months.
He was informed that there is no other health centre in the entire area, due to which the local residents are facing a lot of problems. The Minister apprised the Director General, Health, and District Magistrate, Tehri, about this problem by phone and instructed them to take action at the earliest. During the inspection, senior BJP leader Rajesh Nautiyal, BJP Mandal President Hukum Singh Ramola, Yuva Morcha President Rajesh Sajwan, Mahila Morcha President Resha Nautiyal, former President Sobat Singh Kaintura, Vikram Chauhan, Rajendra Singh Chauhan, Gopal Kantura, President Meera Devi and others were present.