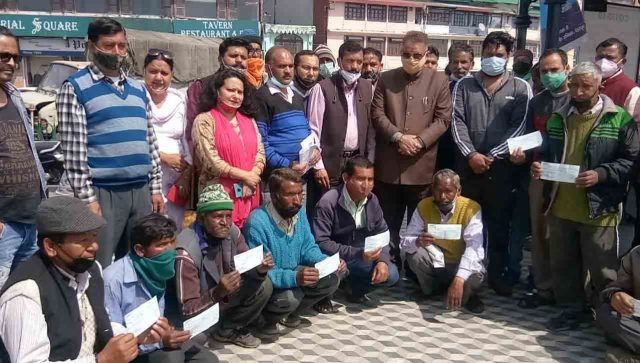 By Our Staff Reporter
Mussoorie, 21 Mar: Cabinet Minister and local MLA Ganesh Joshi distributed cheques from the Chief Minister’s Discretionary Fund to 17 families of Shifan Court in Gandhi Chowk, here. He said that all these people were residing in Shifan Court illegally, so they were evicted, because of humanitarian reasons, it was his moral duty to provide help when their homes were demolished.
He revealed that only 32 houses would be built in the place provided by the municipality for these families. He said that the foundation stone of the construction work would be laid before 31 March.
Joshi added that work has begun after his taking oath as cabinet minister and all officials have been asked to prepare and hand over the action plans within 15 days, so that these could be expedited and the public could benefit. He exhorted the officers to work day and night to achieve the goals. The work being done by the government would be circulated on social media, so that the public could know under which schemes they could benefit. He said that due to lack of knowledge of the public welfare schemes being run by the central and state governments, people are unable to take advantage.
He claimed Chief Minister Tirath Singh Rawat is working day and night to benefit the people of the state and, once again in 2022, under his leadership, the BJP would form a government with an absolute majority in Uttarakhand. Cheques worth Rs 21,000, each, were given to all the beneficiaries by Minister Ganesh Joshi, which included Ramesh Prasad Gaur, Balkrishna, Shivlal, Ramesh Godiyal, Pusu Lal, Vijay Kumar, Ghori Lal, Kamal Das, Jaipal, Manohar Singh, Dayal Singh, Kusum Bisht, Jaipal Singh, Bhopal Singh, Satyendar Lal, Rajkumar and Raisingh.
Among those present on the occasion were Mussoorie BJP Mandal President Mohan Petwal, General Secretary Kushal Rana, Mahila Morcha President Pushpa Padiyar, Amit Panwar, Dharampal Panwar, Mukesh Dhanai, Sapna Sharma, Anil Singh and Abhilash.