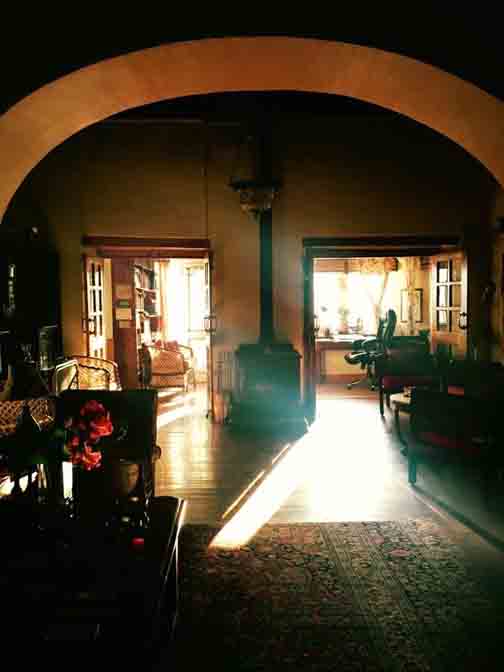 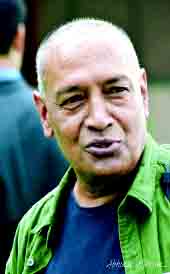 ‘Saili pagla gaya!’ That’s what
our Khachar-khana mohalla
muttered on hearing we were moving house. ‘Bhoot Bangla hai!’ (That’s a haunted house.)
Or had my father really lost his marbles? Here he was taking his family into the middle of a wilderness in 1950. We were going near an empty Mullingar Hotel; to the west of which lay Trim Cottage, a derelict evacuee property and to the south rose the ruinous Standish Hall’s chapel.
Landour tends to go to bed early, earlier than Mussoorie anyways. Its only street so busy throughout the day is like the street of a deserted city at night. If you get past the small mean lanes that crisscross the one street you will find not a soul aboard except for the strays scurrying around. The houses? They remain shrouded in darkness.
And old homes like ours, wrapped in clumps of trees – deodar, oak and rhododendron – were built by the early pioneers with whatever was at hand. The beams came from the trees; gravel from the nearby quaries; lime and mortar from the kilns of Khattapaani. Dear Reader don’t judge our homes by their present looks. There was a time when they were all dolled up, their tin-roofs painted red and walls gleamed white.
In the 1830s, with loneliness getting to them, the soldiers turned to alcohol. ‘Where was the hooch coming from?’ wondered the officers. But only up until the day, a doodhwala’s stumbling emptied the contents of his milk cans: white lightning from Kolti village. As a permanent solution, civilians were invited to settle down in the Cantonment. That shows our home was built on Capt. Young’s old potato patch. Records reveal that the last English owner, E. H. Cockburn, willed the property to his sister, who died interstate, and the estate devolved to the Custodian General. The then Joint-Civil Magistrate, in a possible conflict of interest, snapped up the place. It was from his son, my father had rented the place.
‘Cheer up!’ said Father trying to sound brave. ‘Nothing that a few sticks of furniture won’t fix,’ he said. Off I went to the attic. All I found was a old rocking chair and an Ayes-mirror – four feet long – swiveling on two carved pillars.
What could a mirror possibly be doing up there? And how did it get here? Did it come from of the Sergeant’s Mess at the British Military Hospital?
‘Stop that preening! Applying lipstick or what?’ I can hear the officer bark at the troops. For ‘Ayes Mirror’ or a Yes Mirror can be found in the hallways of Regimental Messes. One never lingered around – one glance and you moved on.
Sometimes, freshers took their time, whipping off their berets, adjusting their ties, seeing if their fly was buttoned? And if the mirror said yes, then you entered the covered space of a Mess.
I think Meera, my kid sister – that bundle of fun – started it all by saying: ‘There’s always a man in the mirror. I saw him!’
‘You’re putting the frighters on us!’ We mumbled. But soon after the mirror acquired a reputation of housing emanations from the past.
Meanwhile, across the ravine to the east soared the turrets of Standish Hall, which had seen better days. On Sunday March 8, 1838 Lady Emily Eden – the Viceroy’s sister – had attended Sunday service there.
Above yawned the Mullingar Flat with just the chowkidar’s family and not a soul in sight.
‘Bhoot hain! Bhaag jao!’ He’d whisper that there were ghosts, wanting us to leave.
But his wife, throwing away her bedi, stomping around, muttering comments in guttural Garhwali, which sounded like curses – and we would wait, linger around for him to leave. ‘Don’t believe the fool!’ Adding ‘Come back on a full moon night and see how Capt. Young returns to tether his white stallion to the railings and a ghostly parade snaps to attention!’
Ghost or no ghosts, I never did find out. But this much I know, the games of childhood were afoot with our singsong chant of ‘Mirror Mirror in the Hall!’
We had finally dropped anchor and come home.