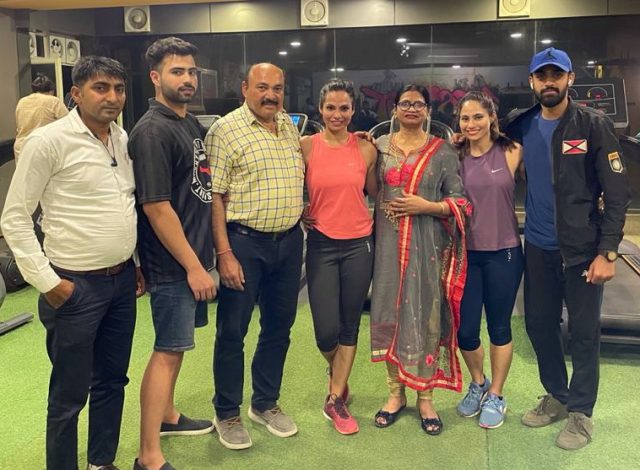 Dehradun, 11 Apr: Doon’s Akanksha Singh, who was the 3rd runners up at Miss Asia 2017, completed her 12-hour non-stop treadmill walk/run. She covered a total distance of 60 kilometres during her 12-hour challenge. She attempted this unique feat to support mental health awareness.
Commencing with her walk/run, kanksha stepped on the treadmill at 9 in the morning. She walked and ran continuously for 12 hours before concluding the challenge at 9 p.m. She undertook this initiative at a gym in Banjarawala.
Akanksha gave credit to her sister and trainer Apeksha Pundir, who arduously trained her for this initiative. She also thanked her mother, Santosh Pundir, father Bhanwar Singh Pundir, and brothers Anubhav and Prabhat Pundir for being a constant support in this endeavour.
On her experience about the 12-hour treadmill walk/run, Akanksha said, “It was an unreal 12-hour-long experience as it exceeded all my expectations. I was so excited and nervous at the same time and had so many emotions while on the treadmill. Along with my parents, so many people came forward to watch and support me via social media live platforms, which motivated me to push myself hard to complete this challenge.”
Giving an insight into the initiative, Akanksha said, “In today’s world, one should have good mental health to achieve good physical health. Mental health has become a major growing problem in the world, and India is not far behind. Issues such as anxiety and depression have become way too common over time, especially among youngsters.”
She added, “My family has also suffered in this regard as my mother was diagnosed with clinical depression. My father worked very hard to support my mother in her journey of battling depression. I always wanted to do something to spread mental health awareness, and I hope that this initiative of mine will do the needful!”
Akanksha’s mother, Santosh Pundir said, “I am proud of my daughter for having the strength and determination to complete this walk. I’ve been through a bad phase in my life battling with clinical depression. Initially, nobody in our family knew what I was going through, as there is no awareness regarding mental health in our society. I wish that this mindset of society changes and mental health isn’t a taboo anymore.”
Akanksha Singh is a Mumbai-based professional model, actor and fitness enthusiast. She was born and brought up in her hometown Dehradun. She was the 3rd runners upat the Miss Asia Award India 2017 held in South Korea. She will be starring in an upcoming Telugu film titled ‘Nedeviduthala’ scheduled to release in June this year.