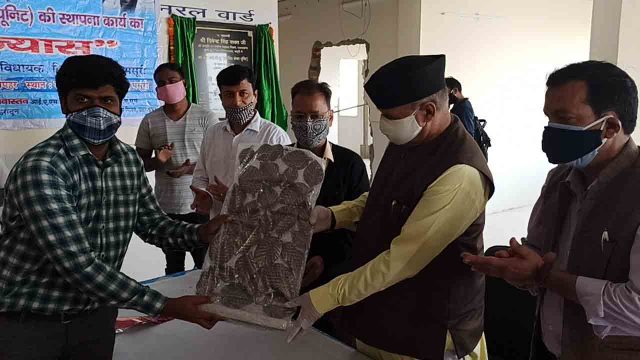 By OUR STAFF REPORTER
Mussoorie, 17 Sep: The foundation stone was laid, today, by Mussoorie MLA Ganesh Joshi of a 5 bed ICU at the Sub District Hospital, here, to be set up by the National Health Mission, Uttarakhand.
On this occasion, MLA Ganesh Joshi thanked Chief Minister Trivendra Singh Rawat for continuously working for the state’s development. He said continuous work was also being done to improve the health facilities of Mussoorie. In the past, equipment worth about Rs 45 lakh had been provided by ONGC to the hospital. An X-ray machine worth Rs 8.5 lakh would be installed in the hospital. He said that, soon, ultrasound facility would also be available at the hospital. He highlighted the need to have an ICU at the hospital in the current scenario. He revealed that the ICU would also have 5 ventilators at the cost of Rs 2.93 crore and would be ready in the next 2 months.
He also claimed that the state government was constantly working on improving health facilities, due to which all the hospitals in the state were being upgraded. This was particularly necessary as Mussoorieis also a tourist destination.
Present on this occasion was President of the Mussoorie Senior Citizens Association, KK Berry, who announced a donation of Rs 1 lakh for the hospital, every year.
Others present were BJP Mussoorie President Mohan Petwal, former municipal chairman OP Uniyal, Kushal Rana, Gambhir Panwar, Dr Khazan Singh Chauhan, Dr Mita Srivastava, Narendra Sahni, Dhan Prakash Aggarwal, Ravindra Goyal, Cantonment Vice President Badal Prakash, Pushpa Padiyar, Ramesh Khanduri, Rajat Aggarwal, Jagjit Kukreja, Abhilash, Anil Singh, Sapna Sharma, Kunal, Ajay Sodiyal, etc.