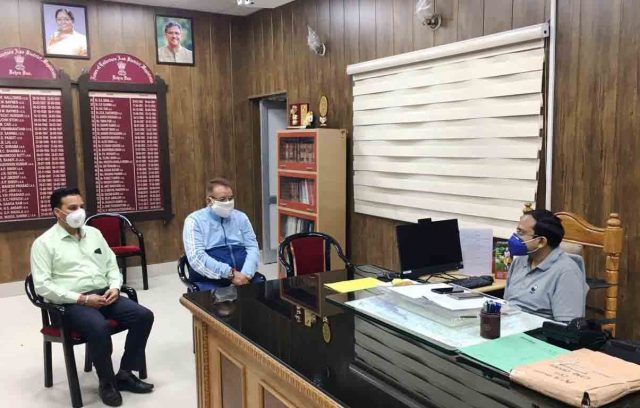 By Our Staff Reporter
Dehradun, 4 Oct: MLA Ganesh Joshi met District Magistrate Dr Ashish Kumar Srivastava and asked him to take action on construction of four roads approved by the Public Works Department in his constituency.
MLA Joshi reminded that the Barlowganj-Chamasari motor road, Galjwadi-Santladevi road in Sahaspur, Hathipaon-Pandai-Jaskhet-Thangaon-Dunga road, and motor road including bridge construction from Halduwala to Veeravadi of village panchayat Rikholi had financial approval, but due to non-clearance by the Forest Department, the work had been stopped. He urged the District Magistrate that necessary action be taken on priority for all four roads to be approved by the Forest Department. He said that the Barlowganj Chamasari Motor Road was approved in the year 2011 but due to non-availability of land for non-forestry works, the construction of this road had not started yet. Eight acres of land had been made available at Doiwala for non-forestry works and soon it would be transferred to the Forest Department.
He claimed that priority was also being given to other schemes related to forest land in the Mussoorie Assembly constituency. District Panchayat Vice President Deepak Pundir was also present on the occasion.