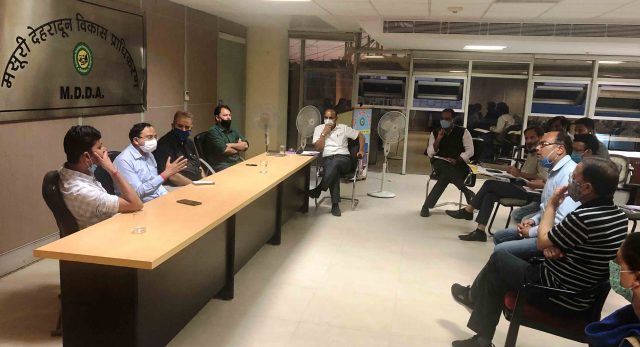 By OUR STAFF REPORTER
Dehradun, 30 Aug: A meeting was held under the chairmanship of MLA Ganesh Joshi on Saturday at the MDDA conference hall regarding the proposed rehabilitation the 84 families to be evicted from Mussoorie’s Shifan Court.
Joshi claimed that the government was entirely on the side of the evacuees and the meeting had been held at the behest of Chief Minister Trivendra Singh Rawat. He urged the local people to put their trust in the government and the administration.
He revealed that discussions were held on the rehabilitation of 84 families and arrangements for housing 38 of these had been finalised. He asked the Mussoorie Palika to send a proposal to the government on providing land so that houses could be built under the Pradhan Mantri Awas Yojana.
He promised that he would pay from his pocket if the displaced families required final assistance. At the same time he sought immediate eviction of people living illegally in the IDH building.
District Magistrate Dr Ashish Kumar Srivastava appealed to the affected people to cooperate with the administration. He promised that 38 families would soon be provided temporary accommodation. He asked the SDM to prepare a factual list of those residing Shifan Court.
Present on the occasion were MDDA Secretary SL Semwal, SDM, Mussoorie, Manish Kumar, EO, Mussoorie, Ashutosh Sati, EE Shyam Mohan Sharma, OP Uniyal, Kushal Rana, Rajat Aggarwal, councilor Savita and others.