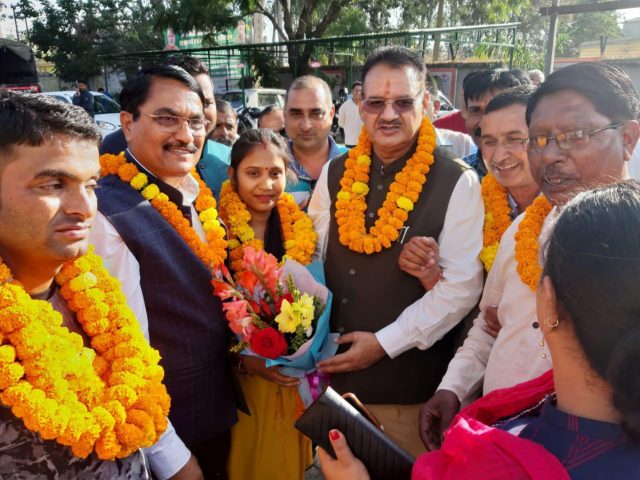 DEHRADUN, 6 Nov: Mussoorie MLA Ganesh Joshi today congratulated Itwar Singh Ramola and Rajpal Melwan on their winning elections to the posts of Senior Pramukh and Junior Pramukh of the Raipur Development Block, respectively. He said that it ought to be the objective of public representatives to take their constituencies on the path of development. In the election held, today, Itwar Singh Ramola received 16 votes as against 4 for rival Sanjay Silwal. Rajpal Melwal received 14 votes as against 6 for Suresh Payal. Divya Bharti was elected Block Pramukh unopposed. Joshi expressed confidence that the majority of BJP supported candidates would win the elections. Victories had been scored by the party in the Doiwala and Vikasnagar Development Blocks. He was similarly optimistic about the Pithoragarh Assembly bypoll. He would campaign for the BJP candidate, Chandra Pant. Present on the occasion were BJP District President Shamsher Singh Pundeer, Anuj Kaushal, Rajesh Sharma, Khempal, Vir Singh Chauhan, etc.