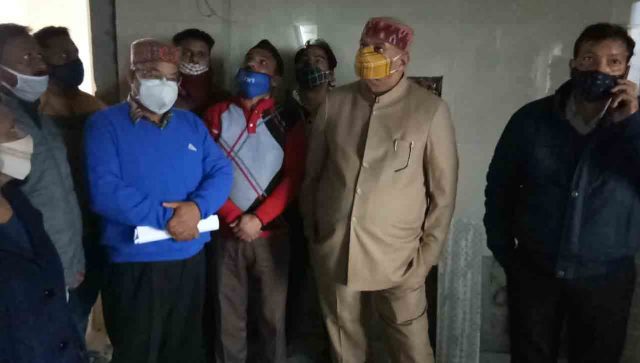 By Our Staff Reporter
Mussoorie, 19 Nov: Mussoorie MLA Ganesh Joshi inspected the ICU under construction at the Mussoorie Sub District Hospital, here, today. He expressed displeasure at the slow construction work.
Joshi rang the CMO, Dehradun, and directed him to take action in this regard. He reminded that Rs 42 lakhs were sanctioned by ONGC for the hospital, but no action had been taken by the hospital management to receive the fund. He said that, on 17 September, he laid the foundation stone for the creation of an ICU of 5 beds in the sub-district hospital, Mussoorie. The construction agency was asked to complete the work within 2 months but, on inspection, it was found that the work is going on at a very slow pace. He said that constant efforts are being made by him to make the hospital better and more equipped. There is a huge shortage of class four staff in the hospital, which could be recruited through outsourcing.
He disclosed that action was also being taken to reopen St Mary’s Hospital. Also present on the occasion were Mussoorie BJP President Mohan Petwal, Kushal Rana, DP Panwar, Amit Panwar, Mukesh Dhanai, Manoj Kharola, Pushpa Padiyar, Ramesh Kanoujia, Narendra Padiyar, Nitin Shah, Anil Singh, Sapna Sharma, Abhilash Sharma, Kunal and others.