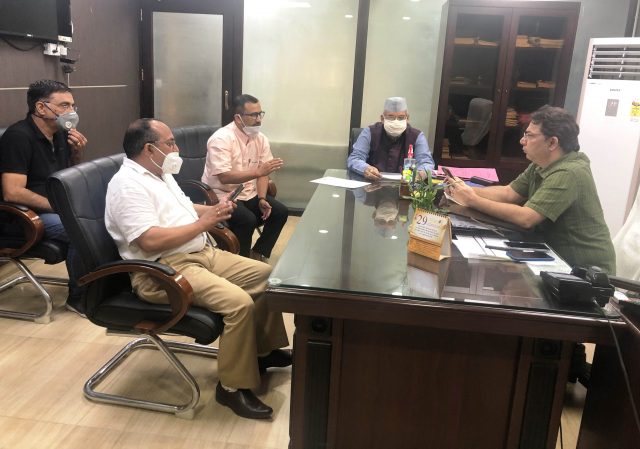 DEHRADUN, 3 Jul: Mussoorie MLA Ganesh Joshi met the MDDA Vice Chairman, Ranvir Singh Chauhan, at the latter’s Transport Nagar office and sought resolution of long pending programmes in his constituency. He pointed out that business persons were facing problems because of the pandemic and it was not right to pressure them on getting their construction maps passed.
He pointed out that people were finding it difficult to get maps passed even for inherited plots because of the high circle rates in many parts of his constituency. Properties were, on the one hand, being sealed by the MDDA and, on the other, the owners were finding it difficult to pay the charges. He wanted the anomalies in the rules to be removed so that people did not face any problems.
He also pointed out that the widening of roads such as the Mussoorie Diversion Road would make many plots unviable. He sought the setting up of mast lights at the Guniyalgaon and Anarwala crossings. He also discussed the one-time settlement for Mussoorie residents.
The VC promised that he would resolve these issues at the earliest. Also present at the meeting were Rahul Rawat, Sunder Singh, etc.

Garhwal Post has established itself as a credible, balanced and forward looking newspaper in India. Based in Uttarakhand, the daily is read by the aware, socially and culturally responsible, high-income elite of society.
Contact us: info@garhwalpost.in
mature kent dating nerd dating websites