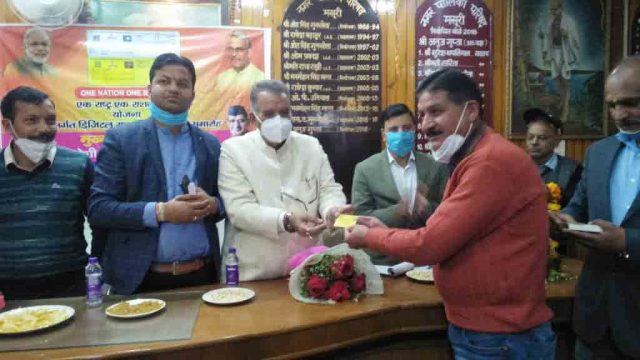 Mussoorie, 25 Feb: Initiating the ‘One nation, one ration card’ initiative in his constituency, MLA Ganesh, today, distributed 75 digital cards to beneficiaries.
On the occasion, he said the initiative is PM Modi’s effort to provide nationwide coverage to ration card users.
The event took place in the Nagar Palika conference hall. He said the launch of the card in his constituency had been started from Mussoorie. Under this as many 5300 cards would be distributed. The digitalisation of cards would solve many issues faced by consumers and eliminate making of fake cards and end theft of ration. A person would be able to use the ration card anywhere in India.
He also thanked the Chief Minister for the waiver of surcharge imposed during the lockdown. He claimed the policies and practices of the BJP government were directed at the welfare of the general public. People who pay their bills before May would benefit.
Palika Chairman Anuj Gupta expressed happiness that the people of Mussoorie would benefit.
District Supply Officer Jaswant Singh Kandari claimed that Uttarakhand had become the first state in the country to begin issuing such ration cards. Sixteen lakh beneficiaries of the state would receive 4 lakh cards.
The event was conducted by Supply Inspector Vivek Sah. Present on the occasion were Mohan Petwal, Kushal Rana, Sandeep Goyal, Rajendra Jhildiyal, Pradeep Kumar, Pushpa Padiyar, ration dealers and beneficiaries.