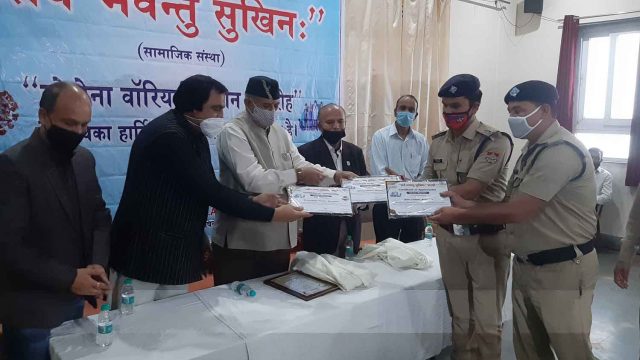 By Our Staff Reporter
Mussoorie, 20 Aug: Forty-five Corona Warriors were felicitated by ‘Sarvey Bhavantu Sukhinah’ social organisation for the commendable work done by various institutions and social workers during the Corona epidemic.
The Chief Guest, Mussoorie MLA Ganesh Joshi, presented the warriors a citation and a memento, each, at a function organised in the auditorium of the ‘Mahatma Yogeshwar Saraswati Shishu Mandir Inter College’, here, today. Police, Health Department, Cantonment Council officers, doctors and social workers were among those felicitated.
MLA Ganesh Joshi said that the corona battle could not be fought without the cooperation of all the people. The awardees had shown solidarity and worked in the front line of the Corona epidemic, while understanding their duty and responsibility towards society. He praised the police, sanitation workers, doctors and hospital staff. He said that, at a time when corona infected people’s own families were running away from them, these corona warriors were saving their lives by serving them. He said the state government is also constantly working to deal with the corona infection and the central government is making a lot of efforts to prepare a vaccine to tackle this epidemic. He expressed the hope that, by the month of October, a corona vaccine would be available in the country.
Executive Officer Ashutosh, who also received the honour, said it was due to the participation of all the people that the state was succeeding in dealing with the corona infection. He said the people were contributing by complying with the advisories issued by the government and administration.
Also present on this occasion were Amit Bhatt, Madan Mohan Sharma, Shanu Verma, Lalit Mohan Kala, Anuj Tayal, Mussoorie BJP Mandal President Mohan Patwal, Kushal Rana, Rajat Aggarwal, Dhan Prakash Agrawal, OP Uniyal, Satish Dhaundiyal, Gaurav Aggarwal, Sunil Goyal, Suresh Goyal, Arvind Semwal, Ajay Bahuguna, Manish Nautiyal, Amit Panwar, Mukesh, Ashish Joshi, Pankaj Semwal, etc.