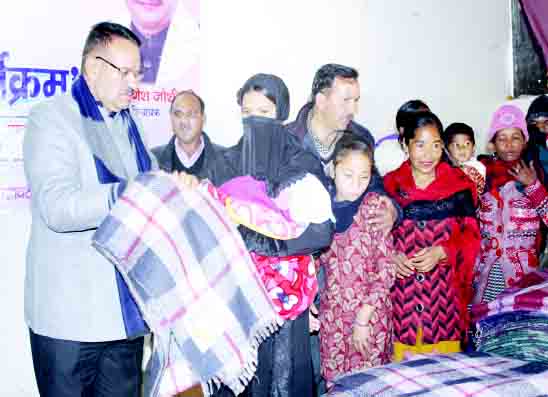 By OUR STAFF REPORTER
Mussoorie, 14 Jan: Mussoorie BJP MLA Ganesh Joshi distributed blankets among a large number of people at a programme organised at a Wedding Point under the aegis of Pandit Deen Dayal Upadhyay Action and Research Society.
On the occasion, he said that whatever he is today is due to the support and blessings of the people of Mussoorie. He always wanted to help the poor and helpless people in some form. Seeing the cold weather in Mussoorie, he had decided to distribute blankets to needy people. He urged all the well to do people to help the poor in various ways.
Joshi claimed that the BJP was fully prepared for the 2019 elections and would form the government at the centre under the leadership of Prime Minister Narendra Modi. The Opposition was coming together to stop the PM, but it would fail. Leaders of the opposition parties were in fear, as day by day, the layer of corruption was unfolding and soon some of them would be in prison. He said the people were evaluating the work done in the country by the Nehru-Gandhi family, and what had been done by Prime Minister Narendra Modi. The people wanted Narendra Modi to, once again, be the Prime Minister of the country. He further said that no matter how big a person was in the party, they were not above law. Any party worker found violating the law and defaming the party would face penalties.
Mussoorie BJP President Mohan Patwal and Kushal Rana said that Joshi had extended his hand to help the poor and needy people from time to time, under which the blankets were distributed to hundreds of poor people of Mussoorie, today.
Among those present on the occasion were Ramesh Khanduri, Lalit Mohan Kala, Sunil Raturi, Vijay Bindwal, Dharam Pal Panwar, Ravindra Rawat, Sapna Sharma, Ajay Sondiyal, Abhilash Rana, Meera Saklani, Chandrakala Sayana, Shashi Rawat and others.