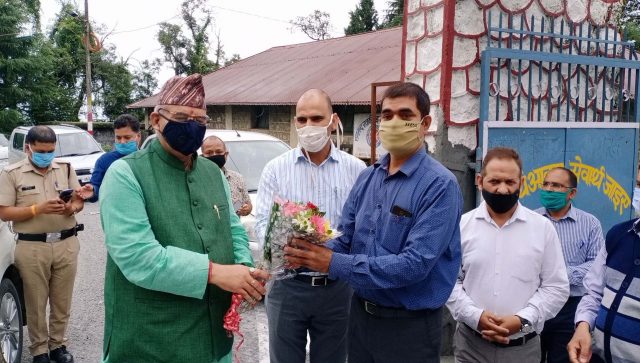 By OUR STAFF REPORTER
Mussoorie, 22 Jul: As part of the Uttarakhand Government’s plan to compete with private schools, 190 state-run inter colleges are going to be made Atal Adarsh Schools. Under this, two schools have been included from the Mussoorie Assembly Constituency to be made Atal Adarsh Schools. Students in these schools will be taught in the English medium.
Mussoorie MLA Ganesh Joshi on Wednesday conducted an inspection of the Mussoorie Ghananand Government Inter College along with officials of the Education Department, and assured all possible help to develop the school. On this occasion, the Principal of the school, Ravi Uniyal, submitted a memorandum of demands to the MLA.
Joshi said that 190 Government Inter Colleges would be made Adarsh Schools. Government Inter Colleges have been selected to become two Adarsh Schools in each development block. He reminded that the selected schools would be run as English medium centre of excellence and would be affiliated to the CBSE board. He said classes from 1 to 12 would be run in these Atal Adarsh Schools.
Block Education Officer Pankaj Sharma said that Mussoorie Ghananand Government Inter College had been selected to be an Atal Adarsh School. Work was underway to provide better facilities in schools under the Atal Adarsh Vidyalaya Scheme in the state. He said that Uttarakhand Education Minister Arvind Pandey and all the officials of the Education Department were working to make the scheme a reality.
Present on the occasion were Anil Kukreti, Nasir Hussain, Rajiv Prasad Joshi, BJP Mandal President Mohan Petwal, Kushal Rana, Arvind Semwal and others.