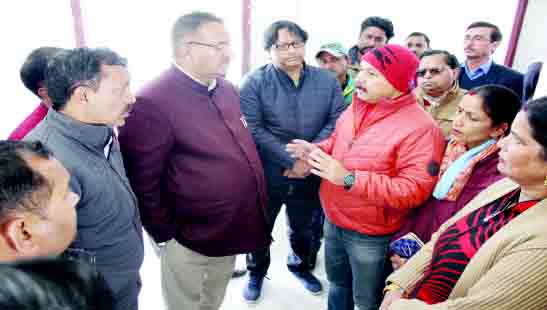 By OUR STAFF REPORTER
Mussoorie, 9 Jan: Mussoorie MLA Ganesh Joshi, today, inspected the under construction Landour Civil Community Hospital with officials of the construction agency and health department. He instructed the officials to speed up the construction work so that the hospital could be ready by the end of March. He also asked them to construct the postmortem house in the premises of the hospital so that there weren’t any problems.
In an interaction with media persons, MLA Ganesh Joshi said the construction of the community hospital equipped with all facilities would be completed by the end of March and dedicated to the public. Recently, Rs 234.81 lakh had been sanctioned by the state government so that the stopped work on the hospital would be completed soon. Rs 350.54 lakh had already been spent on the hospital. He said the hospital would be equipped with modern facilities with 51 beds so that villagers living near Mussoorie and tourists coming from all over the world could benefit. Important facilities like hospitalisation, ultrasound, CT scan, etc., would also be available.
He said that after becoming a hospital, the doctors and staff would be appointed according to the need, so that better health facilities could be provided. Dr AS Pal, CMS, Landour Civil Health Centre, added that the construction of the hospital was speedily underway and they had received financial approval for the under construction hospital. The hospital will be ready by the end of March. After completion of the hospital, a team of 22 doctors would be deployed in the hospital, including specialists.
Present on the occasion were Project Manager, UP Nirman Nigam, SK Malik, Mussoorie BJP President Mohan Patwal, Rakesh Rawat, Chandrakala Sayana, Shashi Rawat, Dharampal Panwar, Rakesh Agarwal, Ravindra Goyal, etc.