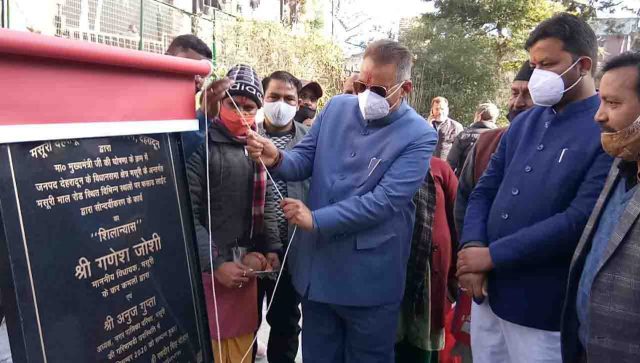 By Our Staff Reporter
Mussoorie, 14 Dec: At a programme organised by the Methodist Church Committee Mussoorie MLA Ganesh Joshi and Municipal Chairman Anuj Gupta jointly laid the foundation stone of façade lights worth Rs 280 lakhs to be installed in various areas of the Mall Road in accordance with the announcement made by CM Trivendra Singh Rawat.
The church committee officials welcomed the MLA and Chairman with flower bouquets. MLA Joshi said that the Queen of the Hills should be beautiful, because of which she is being decorated with different kinds of ornaments to make her beautiful. He recalled that, a year ago, Chief Minister Rawat had announced installation of facade lights at various places. He said that 80% of the announcements made by Chief Minister Trivendra Rawat had been implemented. He said that, before the Christmas feast, the Government had given the gift of beautification of the church with facade lights to the people and Christian Community of Mussoorie.
He declared that he was working for the development of Mussoorie and, soon, he would present the report card of his 4-year achievements as MLA to the public. Commenting on the farmers’ agitation, he said the Congress party had constantly tricked the community. He said the central government was talking to the farmers and all were hopeful that the agitation would end soon. Executive Engineer Shyam Mohan Sharma said that Façade Lights would be installed in various areas including the Mall Road.
Present on the occasion were BJP Mussoorie President Mohan Petwal, Kushal Rana, Councilor Arvind Semwal, Narmada Negi, Rakesh Aggarwal, Anita Saxena, Pushpa Padiyar, Ramesh Kanaujia, Manoj Kharola, Mukesh Dhanai, Amit Panwar, Dharampal Panwar and Sapna Sharma.
These lights would be switched on at 6 p.m. and stay lit till 12 a.m. during the winter months. The lights would be programmed to change colour after every ten minutes.