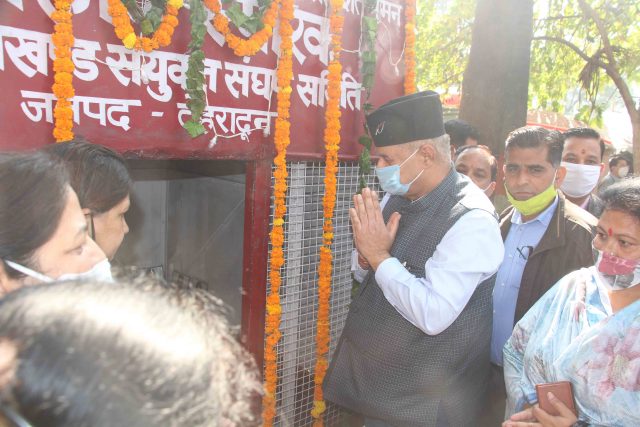 By OUR STAFF REPORTER
Dehradun, 9 Nov: On the occasion of State Formation Day, Mussoorie MLA Ganesh Joshi reached the Martyrs’ Memorial at the Collectorate, here, and paid tribute to the martyrs of the statehood movement. He recalled that the state was formed due to the sacrifices of these martyrs.
He said that, if a separate state had not been formed, he might not have been an MLA today. He also participated in the function organised in the collectorate premises and congratulated the state agitationists on the occasion.
Present with him were BJP Mandal President Poonam Nautiyal, Vishnu Gupta, BJP Mahila Morcha City President Kamali Bhatt, Niranjan Doval, Manjeet Rawat, Jyoti Kotia, Vandana Bisht, Sandhya Thapa, Zila Panchayat Vice President Deepak Pundir, Kanchan Thakur, Councilor Bhupinder Kathait, Nandani Sharma, Mansoor Khan and many others.