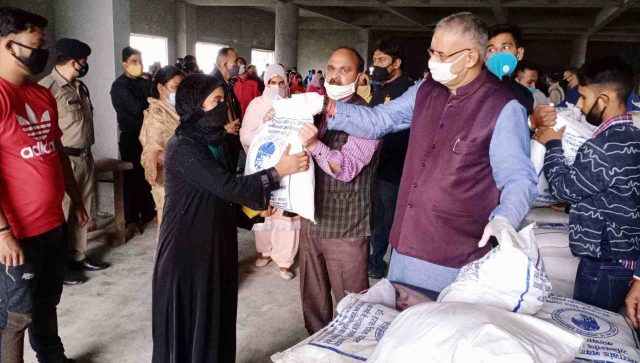 By OUR STAFF REPORTER
MUSSOORIE, 21 Jul: Ration kits provided by the Uttarakhand Labour Department were distributed by Mussoorie MLA Ganesh Joshi to about 500 poor and needy people, here, today.
On this occasion, special attention was paid to social distancing by the police and administration. MLA Joshi thanked Chief Minister Trivendra Singh Rawat and Labour Minister Dr Harak Singh Rawat, saying that ration had been distributed to about 6500 families in the Mussoorie Assembly constituency. Still some people were left out in Mussoorie and surrounding rural areas. In view of this, he had demanded ration kits from the Chief Minister and Labour Minister. In view of this, two thousand ration kits were provided to him by the Labour Department. He said that every worker of the Bhartiya Janata Party had been standing at the door of the public since the first day of the Corona period and was helping them by providing them rations as well as cooked food.
He disclosed that, in the Mussoorie constituency, about 75 thousand people had been provided cooked food and ration kits given to seven thousand people. He said that the small shopkeepers along with the people and businessmen of Mussoorie were in trouble due to the non-commencement of tourism business even after the unlocking. The state government stood with the people of state and was trying to help them in every way possible.
Joshi claimed that the government and administration were fully prepared for natural disasters caused by rain in the state and every possible help was being provided to the people who are affected. He pointed out that, recently, a house had collapsed in Indira Colony, Dehradun, in which 4 people died. In the incident, the seniormost officers of the police and administration were present on the spot to supervise relief work. This showed how the administration and police were fully prepared for disaster relief.
Present on the occasion were Mussoorie BJP President Mohan Petwal, Kushal Rana, Cantonment Vice President Badal Prakash, Gambhir Panwar, Ramesh Khanduri, Anil Singh, Ajay Sondiyal, Kunal, Jashoda Sharma, Anita Saxena, Sumit Bhandari, Ramesh Kanaujia, Virendra Rana and many others.