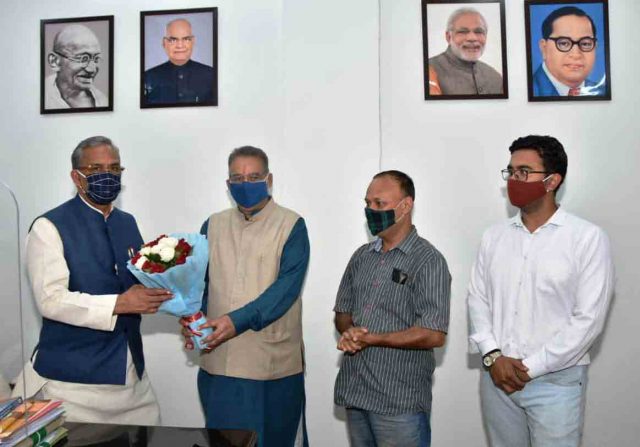 Dehradun, 9 Oct: Mussoorie MLA Ganesh Joshi called on Chief Minister Trivendra Singh Rawat on Friday. He thanked the CM for clearing all impediments regarding construction of the Chamasari-Barlowganj Motor Road. There had been objections to the road as it passes through forest land.

Joshi recalled that the road had been approved by the forest department in 2004. However, because 8 hectares of land for non-forestry work were also required, approval had been held up. The Dehradun District Magistrate had, now, provided the required land in the Doiwala block.

Joshi added that Health Department land had to be transferred to the Civil Aviation Department for construction of a helipad so that helicopter flights could be initiated between Dehradun and Mussoorie under the PM”s ‘Udaan’ Scheme. Land belonging to the St Mary’s Hospital had been identified for this purpose. He requested the CM to green signal this initiative, also. Approval was also sought for the Anarwala, Sirmaur Road and Doon Vihar drinking water projects.

The Chief Minister took note of all these problems and promised appropriate action soon.